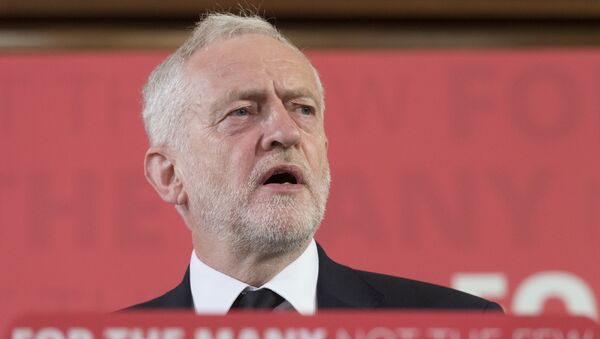 While the Brexit stalemate continues in negotiations between Brussels and London, Labour Party leader Jeremy Corbyn has recently announced his intentions to summon snap elections in a bid to block a “no-deal” Brexit and eventually hold a second referendum on the UK’s status within the European Union.

Jeremy Corbyn has promised to do “everything possible to stop a disastrous no-deal Brexit”, while also referring to Boris Johnson as a “fake populist and phoney outsider”, during a speech in the key marginal area of Corby in the east Midlands, The Guardian reported on Monday, 19 August.

“Johnson is Britain’s Trump, as the US president himself declared, so it must be true. It cannot be said to be fake news”, Corbyn joked during his speech, also claiming that a “no deal Brexit” is more like “Trump deal Brexit”.

Corbyn also announced that current PM Boris Johnson was “driving the country towards a no-deal cliff edge” promising that Labour will do everything possible to stop it. The Labour leader also confirmed his promise to deliver a “no-confidence” vote that would potentially lead to the ousting of Boris Johnson and the holding of general elections in Britain.

“I will bring a vote of no confidence in the government, and if we’re successful, I would seek to form a time-limited caretaker administration to avert no deal, and call an immediate general election so the people can decide our country’s future, said Labour’s leader. "If MPs are serious about stopping a no deal crash out, then they will vote down this reckless government and it falls to the leader of the opposition, to make sure no deal does not happen and the people decide their own future".

Corbyn argued that there were currently no other options to block a “no-deal” Brexit, rather than to hold a “no confidence” vote.

Meanwhile, European Commission spokeswoman Natasha Bertaud argued on Monday, 19 August during a regular briefing that the United Kingdom will suffer the most from a disorderly Brexit, for which the European Union is now fully prepared.

Earlier this weekend, the so-called inter-governmental document “Operation Yellowhammer” that was leaked to the press, stated Britain would suffer from food shortages and delays in medical supplies if Britain leaves the EU by 31 October with no deal in place, which Michael Gove later labelled as a “worst-case scenario”, The Guardian reported.

Britain’s exit from the European Union was delayed after MPs voted down the Brexit deal struck by previous Prime Minister Theresa May, with the current deadline of Britain leaving the EU having been extended to 31 October.