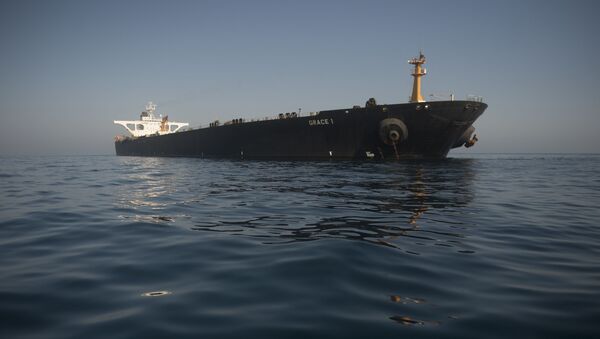 © AFP 2023 / JORGE GUERRERO
Subscribe
International
India
Africa
Earlier this week, the Iranian oil tanker Grace 1 was given permission to leave Gibraltar after spending a month in detention following its seizure by UK marines.

Gibraltar authorities on Sunday rejected another US request not to release Iranian oil tanker Grace 1.

"The Central Authority's inability to seek the Orders requested is a result of the operation of European Union law and the differences in the sanctions regimes applicable to Iran in the EU and the US", a Gibraltar government statement said.

"The EU sanctions regime against Iran – which is applicable in Gibraltar - is much narrower than that applicable in the US", according to the statement.

"We do not plan to send ships to Gibraltar to escort Grace 1, however, as soon as such a request from the Iranian government is received, the Navy will be ready to send its fleet", Khanzadi said, as cited the Mehr news agency.

On Friday, the US Justice Department issued a warrant for the seizure of the Iranian supertanker. According to the document, the vessel, all the oil aboard and $995,000 are subject to forfeiture based on violations of the International Emergency Economic Powers Act (IEEPA), bank fraud, money laundering, and terrorism forfeiture statutes.

Following the detention of the tanker last month, acting Spanish Foreign Minister Josep Borrell claimed that the vessel was detained at the request of the United States, which has long been seeking to curtail Iranian oil exports.

Gibraltar’s authorities later confirmed that Washington had made a last-ditch request to seize the tanker on a number of allegations.