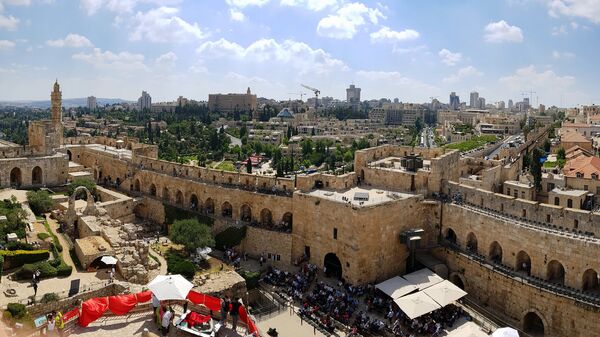 CC BY-SA 2.0 / Yair Aronshtam / View from Tower of David, Jerusalem
Subscribe
International
India
Africa
King Nebuchadnezzar’s capture of Jerusalem is one of the most violent Biblical tales. The legendary siege and invasion are said to have resulted in the destruction of Solomon’s Temple and the captivity of the Israelites. Recently uncovered evidence suggests that this was not a fictional story.

The excavation, carried out by the University of North Carolina in Charlotte, has unearthed the remains of an Iron Age house that bears traces of destruction near Jerusalem’s Tower of David citadel, News Corp Australia reports.

As UNC Charlotte historians suggest, the findings might be evidence of Babylonian King Nebuchadnezzar’s plundering of Judah more than 2,500 years ago, an event which saw the destruction of the First Temple and the people being taken into captivity - something that is mourned by Jews to this day.

“It’s the kind of jumble that you would expect to find in a ruined household following a raid or battle. Household objects, lamps, broken bits from pottery which had been overturned and shattered … and arrowheads and a piece of jewellery which might have been lost and buried in the destruction”, Professor Shimon Gibson told the media outlet.

The dig site at Mount Zion was discovered to have layers of ash containing the artefacts in what seems to be a ruined house. It is believed to have been part of a fortified urban area. The style of the discovered objects suggests that the house was burned at the time when the Babylonian siege of Jerusalem is said to have taken place. For instance, an arrow of the so-called “Scythian” type, which dates back to the 6th and 7th centuries BC and is known to have been used by Babylonian warriors, was found at the dig.

“Together, this evidence points to the historical conquest of the city by Babylon because the only major destruction we have in Jerusalem for this period is the conquest of 587/586 BCE”, Gibson concludes.

Although only part of the ancient building, dubbed the ‘’Great Man’s” house, has been studied, it proves that Jerusalem was a major Iron Age city, according to the outlet. This gives the researchers hope of discovering more about the era during future excavations.

“This spot would have been at an ideal location, situated as it is close to the western summit of the city with a good view overlooking Solomon’s Temple and Mount Moriah to the northeast. We have high expectations of finding much more of the Iron Age city in future seasons of work”, Gibson stated.