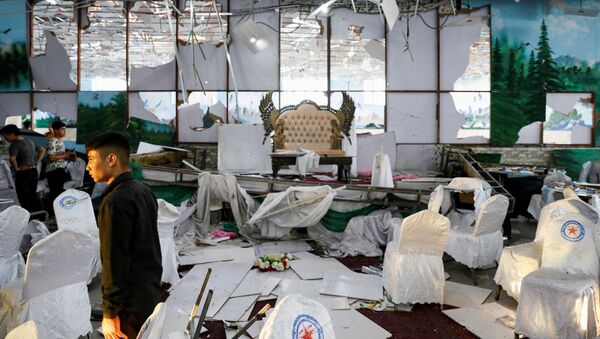 At least 63 people have died and 180 have been injured as a result of a blast that hit the Dubai City wedding hall, in the west of Afghanistan's capital earlier in the day.

Hours after the blast, Daesh claimed responsibility for the incident. Earlier in the day, the Taliban movement has rejected the involvement of the group in the bombing and condemned the attack.

"I strongly condemn the inhumane attack on the wedding hall in Kabul last night. My top priority, for now, is to reach out to the families of victims of this barbaric attack. On behalf of the nation I send my heartfelt condolences to the families of those who were martyred," he tweeted.

Ghani added that he had already ordered the relevant authorities to assist in managing those injured in the deadly blast.

"In response to this targeted attack I have called an extraordinary security meeting to review and prevent such security lapses," he added.

The explosion took place at a wedding reception in the west of Afghanistan's capital on Saturday evening at 22.40 local time (18.10 GMT), leaving at least 63 people dead and over 180 injured.

An explosive device was reportedly detonated by a suicide bomber. The Afghan Interior Ministry said that women and children were among the victims of the blast. Afghan President Ashraf Ghani condemned the attack and expressed condolences to the relatives of the victims.