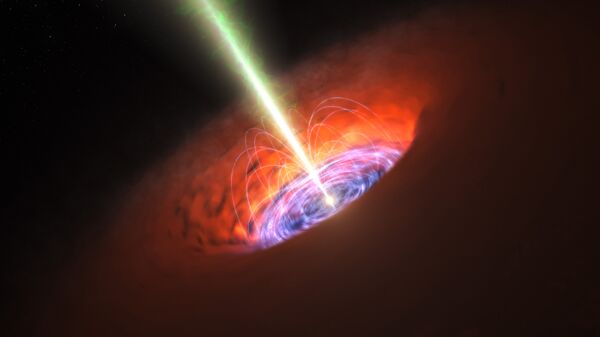 The supermassive black hole known as “Sagittarius A*” (or Sgr A*) has been watched by scientists for years. Although this space giant has been relatively calm for a black hole, everything changed recently when it emitted an unprecedented amount of radiation.

An astronomer from the University of California, Los Angeles (UCLA), has shared a 2.5-hour time lapse of images of the supermassive black hole Sgr A* with a record amount of glow around it. Researcher Tuan Do, whose team is studying this giant in the centre of our galaxy at the W. M. Keck Observatory in Hawaii, observed that it became 75 times brighter this May.

Here's a timelapse of images over 2.5 hr from May from @keckobservatory of the supermassive black hole Sgr A*. The black hole is always variable, but this was the brightest we've seen in the infrared so far. It was probably even brighter before we started observing that night! pic.twitter.com/MwXioZ7twV

​His team has published a paper on their discovery in Astrophysical Journal Letters. The article says that although the Milky Way’s own black hole, known to be highly variable, has been observed in the near-infrared for over 20 years, it reached much brighter flux levels in 2019 than ever before measured.

What prompted the unprecedented space show remains a mystery. As the astronomer pointed out, it is hot gas falling towards the black hole, before it crosses the event horizon that makes space around it brighter as black holes don't emit light. He suggested that increased activity could be related to changes in the gas flow, but struggled to define why it happened or how long it will last.

The researchers offered several hypotheses. Their paper suggested that the potential physical origins of Sgr A*'s unprecedented brightness may be from changes in the accretion-flow after a star passed close to it in 2018 or even a delayed reaction to the approach of a dusty object in 2014.

Tuan Do reassured everyone on Twitter, saying “what is going on with the black hole will not affect the Earth” as it is 26,000 light years, or 260 quadrillion kilometres, away. Besides this, it is behind a vast amount of dust.

“While it is very bright compared to historical data, it is not enough to affect us. Enjoy the fireworks and we hope to learn some cool black hole physics!” the astronomer tweeted.