'Most Lethal Bowler in World Cricket': Twitter in Shock as Archer Smiles After KOing Steve Smith 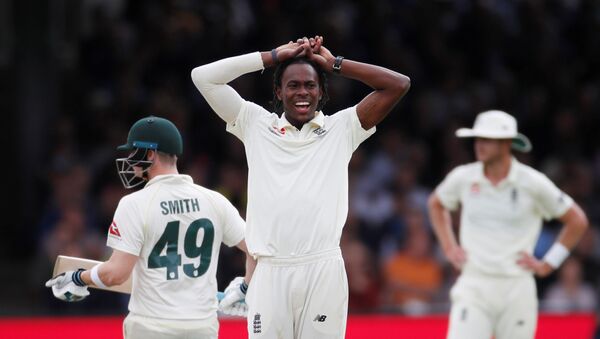 Tim Korso
All materials
While some netizens slammed the player’s "inappropriate" behaviour, others pointed out that this could simply have been a mask to hide his real distress over injuring another player.

The fourth day of the second Ashes Test cricket championship was overshadowed by the UK's Jofra Archer delivering two major blows to Australia's Steve Smith with a bouncer, forcing him to interrupt his participation in the game due to injury. Smith shook off the first hit relatively unscathed, as it struck his forearm. The second one, however, hit him on the neck, beneath the helmet, effectively knocking him out and falling to the ground.

Some twitterians called the incident "frightening", while others proclaimed that Jofra Archer is "the most lethal bowler in world cricket" of our time.

Is Jofra Archer the most lethal bowler in world cricket today? He did this to three batsmen in this year's World Cup. I'm seriously praying for Steve Smith. Really concerned about him now. pic.twitter.com/0Zeh9C0092

But it's not Archer's "killing" throws that shocked netizens the most, but rather seeing him moments later smiling in the company of teammate Jos Buttler. While there was nothing to suggest that the two were laughing at the situation that sent Smith to the ground and guaranteed him a check-up for a concussion, some netizens still pointed out that it appeared inappropriate.

That's actually missed the helmet altogether - it's struck @stevesmith49 in the neck. Archer seen laughing shortly after - that's going to cop some attention.

Archer laughing while Smith is on the ground

I know who should be boo’ed

Many netizens came to Archer's defence, though, pointing out that he actually looked shocked right after the incident and that the smile could be a way to cope with or hide this.

Lot of anger directed online at Jofra Archer over reaction to bouncer that hit Steve Smith. To me, Archer looked rattled immediately after, walked away more in shock than indifference. Don’t know about smile but would be surprised he took glee from hurting Smith #Ashes

A smile can often be a facade hiding other emotions....don’t judge Jofra Archer unless you know exactly what was going through his mind after he hit Smith. I reckon he’d be thanking his lucky stars Smith seems OK.

Despite sustaining a significant injury, Smith returned to the game later in the session after being briefly assessed by a doctor. According to a statement by the team, Smith is slated to undergo additional check-ups in the near future as a result of the two blows that he received.