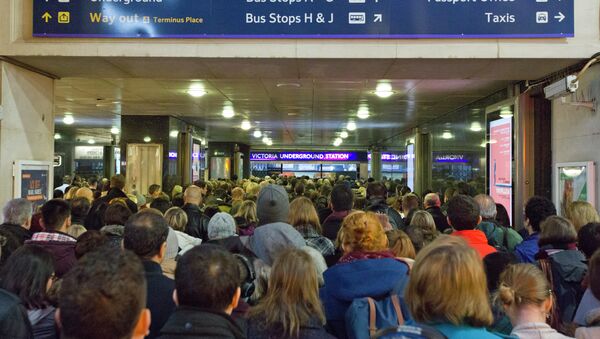 The United Kingdom could face fuel, food and medicine shortages and jammed ports if London leaves the European Union without a transition Brexit deal, The Sunday Times has revealed.

Compiled earlier this month by a Cabinet office under the codename "Operation Yellowhammer" the leaked dossier offers a glimpse into the covert planning being carried out by the UK government to avert a potential collapse in British infrastructure, UK-based media said.

The Sunday Times has obtained a copy of the government's classified 'Yellowhammer' report on the chaos expected after a no-deal Brexit. Find out how Whitehall is preparing for food and medicine shortages, transport disruption and civil unrest in our comprehensive coverage. pic.twitter.com/UwDmCUtsbt

​According to documents cited by The Sunday Times as "official sensitive" and requiring security clearance on a "need to know" basis, the nation remains largely unprepared for a no-deal Brexit scenario and that growing "EU exit fatigue" has hampered contingency planning which has been stalled since the UK's original departure deadline of 29 March.

Operation Yellowhammer documents reveal that the UK government expects the return of a hard border in Ireland, which could  spark local protests and road blockages and eventually "affect fuel distribution".

The availability of fresh food will be reduced and prices will rise and this could hit "vulnerable groups", Operation Yellowhammer said.

A no-deal scenario may also spark protests across the UK, which could "require significant amounts of police resource[s]", the leaked documents said.

UK-EU air traffic may be also affected, according to the classified data. In particular, passenger delays at EU airports and border checkpoints are reportedly expected.

UK Prime Minister Boris Johnson, who assumed office in July, stressed that he would try to renegotiate the withdrawal agreement to get rid of the backstop clause, but if that did not happen, the United Kingdom would still leave on the agreed deadline of 31 October — even without a deal.

The European Union has repeatedly said that it would not reopen talks on the withdrawal deal agreed with Johnson's predecessor Theresa May, who left after failing to push an agreement through  Parliament.

In 2016, UK citizens in a referendum voted to leave the European Union. The country was initially set to withdraw from the bloc last March but UK lawmakers have not endorsed the Brexit deal agreed upon by London and Brussels, and the deadline was moved to October.