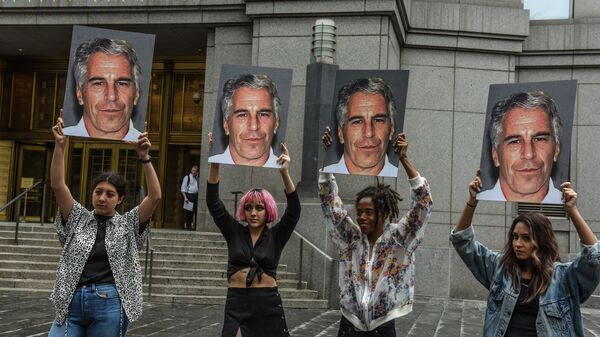 Polina Strelnikova
All materials
Disgraced US financier Jeffrey Epstein reportedly committed suicide in his prison cell where he was awaiting trial over accusations of trafficking under-age girls for sex. His death has sparked conspiracy theories suggesting that some powerful people wished him dead, as Epstein’s trial could have exposed their complicity in his alleged sex ring.

Jeffrey Epstein's lawyers have announced that they are planning to carry out an independent investigation into the death of the multi-millionaire, accused of sex-trafficking, and demand video footage from the prison. According to his legal team, they are "not satisfied with the conclusions of the medical examiner" that he killed himself in his cell in New York's Metropolitan Correctional Centre.

"It is indisputable that the authorities violated their own protocols", the lawyers said, also criticising the "harsh, even medieval conditions" in Epstein’s prison.

The New York Medical Examiner's Office released its official autopsy report on his death on 16 August, six days after he was found unresponsive. It found that he had committed suicide by hanging. The late financier is said to have used bedsheets to create a makeshift noose and hang himself from his prison bunk bed. The report concluded that bones in Epstein’s neck were broken due to kneeling toward the floor with sufficient force to break them.

However, Epstein's death remains the subject of four federal investigations, including the conduct of the guards assigned to watch him on the night of his death.

Although initial reports that Epstein’s death was a suicide came immediately after he was found dead, his demise prompted conspiracy theories that he had been murdered by his highly-connected friends, who were fearful that the disgraced financier might expose their connections to the alleged paedophilic trafficking. The theories were triggered by reports that the 66-year-old had been taken off suicide watch just weeks after he had reportedly attempted to kill himself.

The New York Times recently reported that Epstein had paid money to the inmates' prison commissary accounts, trying to curry favour with other prisoners. He is also said to have slept on the floor instead of a bunk bed and gone unwashed during his last days alive.

Meanwhile, a report in Forbes magazine cites a lawyer visiting the prison who allegedly said that Epstein had spent several hours locked up alone with an unknown young woman in a private room reserved for inmates and their attorneys a day after the financier was taken off suicide watch. The attorney suggested that the woman, who was alone with Epstein for at least two hours when he was there, was possibly a lawyer. However, she appeared to have no paperwork or files with her, and was dressed casually, as if out for “Sunday brunch".