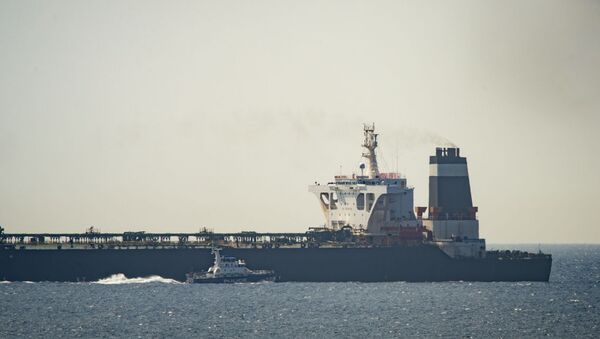 The authorities of Gibraltar ruled earlier on Thursday to release the tanker, which was captured on 4 July on suspicion of transporting oil to Syria in alleged violation of EU sanctions.

Spokesperson for the US Department of State Morgan Ortagus claimed in a statement on Thursday, that Grace 1 "was assisting the Islamic Revolutionary Guard Corps (IRGC) by transporting oil from Iran to Syria" and this "could result in serious consequences for any individuals associated with the Grace 1". Ortagus warned that the US "intends to revoke visas held by members of such crews".

Statement from @statedeptspox on #Grace1 and #Iran. pic.twitter.com/OLIrDCU2bZ

According to the Gibraltar Chronicle newspaper, the US Department of Justice sought to seize Grace 1 mere hours before Gibraltar was poised to set it free. The vessel, however, was still released, albeit a few hours after the supertanker’s captain and three crew members were freed.

On Thursday, Zarif said that the detention of Grace 1 "was 100% unlawful", stressing that the "EU sanctions do not apply to Iran".

Our London Embassy note to UKFCO:
-Protested the illegal detention of Grace1;
-Repeated public statements about destination; &
-Made it crystal clear that EU sanctions do NOT apply to Iran—a position shared by most Europeans.

Nothing changes the fact: detention was 100% unlawful pic.twitter.com/lwJ2gYKpf6

The tanker was formally detained on suspicion of breaching EU sanctions against Syria. Acting Spanish Foreign Minister Josep Borrell, however, claimed that the vessel was detained at the request of the United States, which has long been seeking to drive Iranian oil exports to zero. At the same time, Iranian Deputy Foreign Minister Abbas Araghchi denied the information that the detained tanker had transported oil to Syria.

The tanker was detained by the Gibraltar law enforcement, supported by UK marines. The seizure prompted a row between Tehran and London. Iran, which has slammed the move, seized a UK-flagged tanker with 23 crew onboard in the Strait of Hormuz over violation of nation's territorial waters later in July.

Tensions between the United States and Iran have been recently escalating.

In 2018, the Trump administration withdrew from Joint Comprehensive Plan of Action (JCPOA), which coordinated the descaling of Iran’s nuclear program in exchange for gradually lifting sanctions against the country, and then hit Iran petroleum industries with new sanctions earlier this year, prompting Tehran to begin reneging on its obligations by increasing its supplies of low-enriched uranium.

In May, four oil tankers were targeted in sabotage attacks off the Untied Arab Emirates' coast. In June, two more oil tankers were hit by explosions in the Strait of Hormuz, which connects the Gulf of Oman with the Persian Gulf. The United States blamed Iran for the incidents and started building up its military presence in the Gulf afterward. Iran has repeatedly deniead any wrongdoing.

Meanwhile, the United States has been reportedly trying to build a coalition to secure maritime security in the strategic Strait of Hormuz, through which one third of all seaborne petroleum passes.