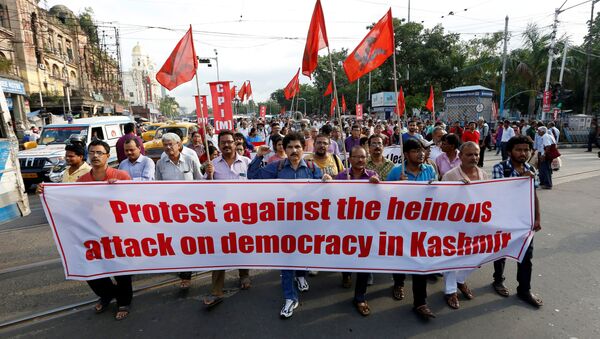 New Delhi (Sputnik): Historian Ramachandra Guha is under fire on social media for criticising the Indian government’s recent move to revoke Articles 370 and 35A of the country’s Constitution that granted special status to Jammu and Kashmir.

Guha has described the government move to scrap Jammu and Kashmir's special status as an "arbitrary misuse of state power" and warned Indian citizens not to remain silent about it.

He said not objecting could allow the Central Government to consider similar action in other states in the future.

"This is not an issue about Kashmir alone. This is not an issue about alienation alone. I would like every Indian to reflect on the arbitrary misuse of state power. An entire population of 12 million is shut out from a decision that's supposed to be in their interests. What happened in Kashmir today 5 August could happen in your state tomorrow unless you are vigilant enough to protect the Constitution," Guha said in an interview with television news channel NDTV.

He said India's President Ram Nath Kovind had acted in haste and unwisely in approving the government notification on Kashmir. President Kovind, by endorsing the legislation without reflecting on it, acted much like his predecessor President Fakhruddin Ali Ahmed, when he signed off to place India in a state of emergency in 1975.

Some netizens felt Guha's views and comments were unpatriotic. Some even questioned his excessive loyalty towards earlier governments headed by the opposition Congress party and to the Nehru-Gandhi family.

"You picked a fine time to leave me, Lucille”

Nice touch, that, Ramchandra. You chose a fine day to sing ‘your’ kind of paeans for India.

Hark. Oblivion definitely beckons for your kind of dishonest intellect.

Ramchandra Guha seems like a person living in a bubble of the Lutyens Baburaj & i always consider him as Bootlicker of Gandhi family & rate him as Urban Naxal.

Strongly condemn de audacity of Ramchandra Guha, ever since he was getting traction on Pressticoot Media, I had my own doubts about his bonafides and abilities to fight for India on Kashmir issue. https://t.co/g6GBTLxwhC

India’s most distinguished historian downgrades the country’s status as a democracy https://t.co/qR7DC2RUNT

There are two guhas who are detested for their perversion of anti Modi ideology.. one Ramchandra Guha and the other paranjoy Guha thakurta... Both are imbecile speakers .

​Tensions have risen between New Delhi and Islamabad ever since India revoked the much-debated and controversial Article 370 of the Indian Constitution that stripped Jammu and Kashmir of its special constitutional status last week.

Objecting to the move, Islamabad retaliated by scaling down diplomatic relations with New Delhi and suspended trade and communication links. It also approached the UN Security Council on 13 August, claiming that India had violated UN Resolutions.