CC BY 2.0 / JD Lasica /
Subscribe
International
India
Africa
The only reported progress of Friday's closed United Nations Security Council (UNSC) meeting on the disputed region was a handshake between Pakistani journalists and India's envoy to the UN Syed Akbaruddin, who reportedly assessed it "a sign of friendship."

Friday’s closed-door meeting at the request of China was prompted by Pakistan Foreign Minister Shah Mahmood Qureshi who, in a letter addressed to UNSC President Joanna Wronecka requested to convene  consultations on Jammu and Kashmir, citing a number of human rights violations allegedly committed by the Indian authorities before and following the decision to revoke the special status of the state, as well as to the threats to international peace and security this action might pose.

India’s envoy to the UN, Syed Akbaruddin, emphasized after the meeting that New Dehli had imposed reasonable restrictions in Kashmir “to stop terrorists bleeding our people”, according to the Press Trust of India news agency.

Akbaruddin also stressed that the matters relating to Article 370 were internal to India and did not have external ramifications.

“We are committed to gradually removing the restrictions now in force in the state [...] And India remains committed to ensuring the situation remains calm and peaceful [...] We are committed to all the agreements we have signed on this issue”, Akbaruddin said, cited by The Hindustan Times media outlet.

The Indian envoy, however, reportedly blasted Islamabad without naming the country. “It is using the terminology of Jihad and is promoting violence in India including against its leadership [...] India remains committed to resolving all issues between India and Pakistan and between India and any other country bilaterally and peacefully", Akbaruddin said, according to The Hindustan Times.

After the short news conference, Akbaruddin shook hands with Pakistani journalists, reportedly saying that "this is a sign that we reach out a hand of friendship".

Pakistan's UN envoy, Akbaruddin, in turn, reportedly remained laconic and said after the closed meeting that “this is the first and not the last step”, according to The Hindustan Times. Akbaruddin and his Chinese counterpart did not take questions from journalists after the closed UNSC session.

According to The Hindustan Times, citing Chinese Envoy to the UN Zhang Jun, the Security Council listened to briefings and reports presented by UN bodies at the consultations that lasted just over an hour and members expressed “serious concerns” about the situation in Kashmir, urging all parties not to take unilateral action that could further aggravate the situation.

The last time the issue of Jammu and Kashmir was on the UNSC agenda was a meeting on 21 December 1971, which was followed by the adoption of a resolution calling for a durable ceasefire, the halt of all hostilities in conflict areas and the provision of international assistance to refugees impacted by the territorial dispute. 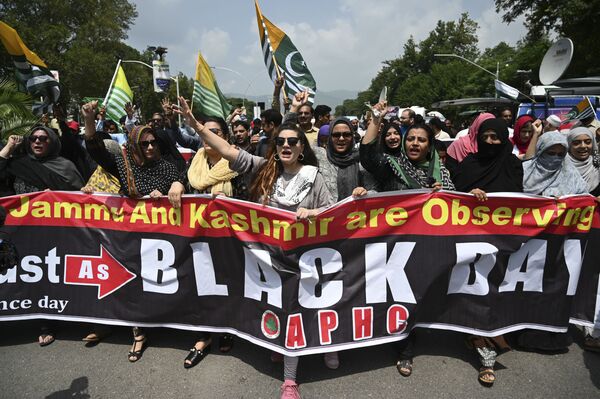 India and Pakistan have contended for the Kashmir region, the southern part of which lies in India's Jammu and Kashmir state, since the end of British rule in 1947. Despite a ceasefire being reached in 2003 following several armed conflicts, instability has continued, leading to the emergence of various extremist groups. Tensions spiked earlier this year when the Indian military conducted airstrikes in the region in response to an attack orchestrated by a terrorist group based on the Pakistani side of Kashmir.

On 5 August, Indian President Ram Nath Kovind signed a decree removing Article 370 of the Indian constitution that had ensured Jammu and Kashmir’s special status. Under the Indian government’s new initiative, Jammu and Kashmir will be divided into two territories. 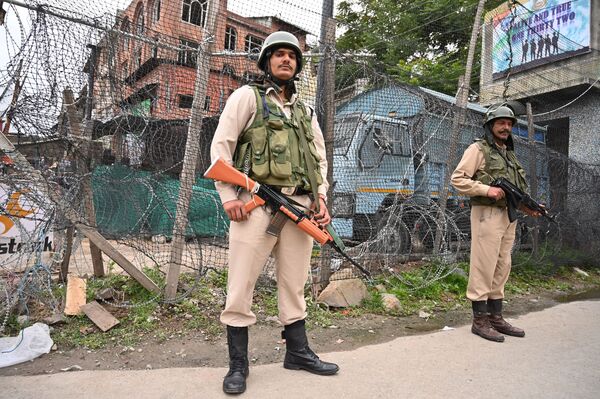 The move incited protests from Islamabad that disputes the larger Kashmir region, which India's Jammu and Kashmir is part of. The move reportedly prompted violent clashes on the Indian-Pakistani line of control and led Islamabad to downgrade its diplomatic relations and suspend trade with India.

Earlier this week, at least four servicemen of the Pakistan Army were killed in skirmishes with Indian soldiers in the disputed Kashmir region.

Pakistan claims that the clashes have resulted in multiple injuries, adding that fortifications have been damaged. Islamabad accuses Indian soldiers of initiating the fight, noting that five Indian servicemen have been killed in retaliatory firing. New Delhi has refuted the accusations.