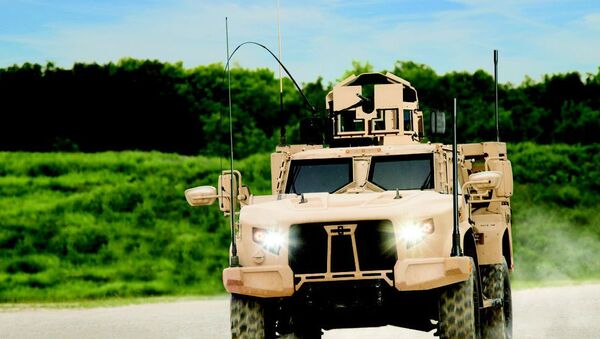 The purpose of the military program is to replace the High Mobility Multipurpose Wheeled Vehicle (Humvee) with the more durable JLTV. According to the Defense Security Cooperation Agency, IOC is defined as the “first attainment of the capability to employ effectively a weapon, item of equipment, or system of approved specific characteristics, and which is manned or operated by an adequately trained, equipped, and supported military unit or force.”

"The warfighting capabilities the JLTV provides our Marines far exceed the capabilities offered by its predecessor," Marine Program Executive Officer for Land Systems John Garner said in a recent release. "I'm proud of what our team, in collaboration with the Army, has accomplished. Their commitment to supporting the warfighter delivered an exceptional vehicle, ahead of schedule, that Marines will use to dominate on the battlefield now and well into the future."

The IOC declaration comes as officials announced that the service has nearly doubled the number of JLTVs it plans to purchase to replace its Humvee fleet, from 9,000 to 15,000. The Corps originally announced it would be buying 5,500 JLTVs.

The Humvee was developed in the 1980s as a light-duty utility truck. During the wars in Afghanistan and Iraq, it revealed itself to be vulnerable to improvised explosive devices and explosively formed projectiles.

Before the JLTV program could reach IOC, all operators had to be trained, and maintenance tools and spare parts packages had to be prepared.

"IOC is more than just saying that the schoolhouses and an infantry battalion all have their trucks," Eugene Morin, product manager for the JLTV at Program Executive Office Land Systems, wrote in the release. "All of the tools and parts required to support the system need to be in place, the units must have had received sufficient training, and each unit commander needs to declare that he is combat-ready."

The JLTVs are expected to be fielded to Marine expeditionary units before the end of next month.

"We are really at the starting line right now. Our grandchildren and great-grandchildren will see JLTVs in the DoD [Department of Defense],” Marine Light Tactical Vehicle Program Manager Andrew Rodgers said in the release. "We'll easily still have these assets somewhere in the DoD in the year 2100."