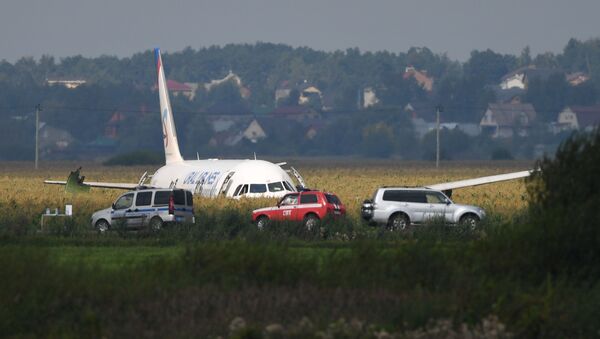 WASHINGTON (Sputnik) - The crew of the Airbus A321 airplane that made an emergency landing in the Moscow region earlier on Thursday acted in a magnificent manner, according to the US-based aviation safety expert Todd Curtis.

“It looks like the crew reacted in a splendid fashion”, Curtis, who is also a former Boeing engineer, said.

The airplane, traveling from Moscow to Simferopol, was forced to make a hard landing in a cornfield near the Zhukovsky Airport 36 kilometers southeast of Moscow.

According to Russia’s Federal Transport Agency Rosaviatsiya, there were 226 passengers and seven crew members onboard the A312.

Russia's Emergencies Ministry said that at least 75 people, including 19 children, sustained injuries during the emergency landing.

Curtis said all modern airplanes, including the A321, may continue to fly and land safely in case of engine breakdown during the critical phase of the flight while taking-off.

“It appears that the crew landed about one kilometer from the end of the runway, so any actions taken by the crew would have to be implemented very soon after the impact", Curtis said.

Shortly after taking off, the airplane struck a flock of gulls, which disrupted the work of the aircraft’s two engines and forced it to land on a nearby cornfield.

Views and opinions expressed in this article are those of Todd Curtis and do not necessarily reflect those of Sputnik.