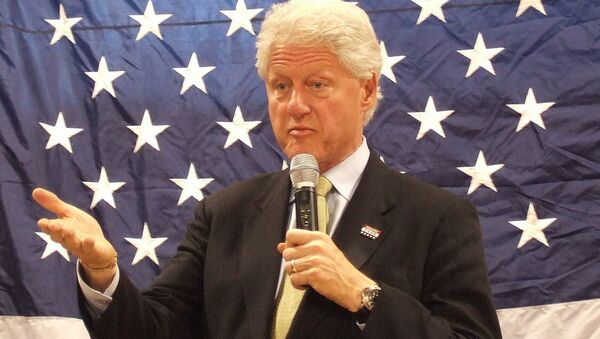 CC BY-SA 2.0 / Jayu / Bill Clinton
Subscribe
International
India
Africa
A witness said the eyebrow-raising painting was there when she visited the now-deceased pedophile in 2012. It is unclear why exactly the man displayed the strange picture in his Manhattan mansion.

As the notorious Jeffrey Epstein case unfolds, more and more eyebrow-raising discoveries regarding the convicted sex offender who was also accused of sex trafficking are being made. As if Epstein’s list of powerful acquaintances (which includes US Presidents Bill Clinton and Donald Trump and, according to a recent report, Bill Gates) was not enough, a very strange painting of Clinton was found hanging the dead man’s Manhattan residence, The Daily Mirror reported Wednesday.

An observer can tell it’s the Oval Office, because a fragment of the presidential seal and the trademark blue carpet is seen.

While some media speculated that the blue dress was a reference to Monica Lewinsky, the dress closely resembles one Hillary Clinton wore at the 2009 Kennedy Center Honors, The Sun reported.

If you thought that was weird check out this collage put together by @DailyMail of a similar if not the same dress worn by @HillaryClinton and just look how @BillClinton sits 😶 pic.twitter.com/5itW1tGJTB

​Entitled “Parsing Bill,” the painting is attributed to Manhattan-based Australian-American artist Petrina Ryan-Kleid. It is unclear whether Epstein’s mansion was adorned with the original painting or a print, The Daily Mail report noted.

The media report said that the painting was spotted at least once in 2012 by a visitor who came to Epstein’s place for a business talk.

"It was absolutely Bill Clinton. It was shocking - it was definitely a painting of him. It was a very provocative, sexual picture,” the anonymous witness said, according to The Daily Mirror. "He was wearing heels, a blue dress and his hand was in a weird position."

However, weird doesn’t stop there, as Epstein appeared to have particularly peculiar tastes in home decorating.

The New York Post said that Epstein had a mannequin clad in a wedding gown hanging from the ceiling above a staircase.

Epstein, 66, was found dead in an apparent suicide on 10 August in his prison cell, after he was arrested and charged with sex trafficking. His circle of rich and powerful acquaintances, which Epstein liked to boast of, sparked theories that someone with money, power and dark secrets could have “assisted” Epstein in his suicide efforts.