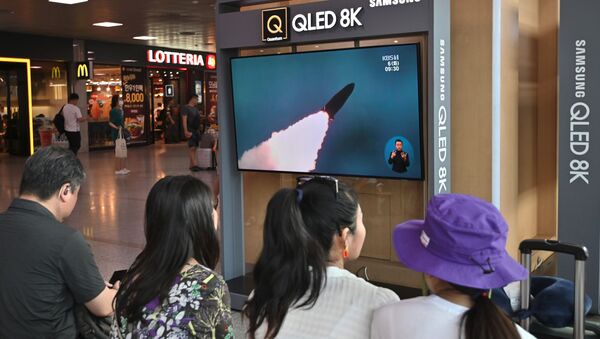 © AFP 2021 / JUNG YEON-JE
Subscribe
Since late July, Pyongyang has carried out a number of tests of what are reportedly short-range ballistic missiles. The latest launch reportedly occurred amid the ongoing South Korean-US joint military drills, which kicked off on 5 August and will last through 20 August.

South Korea's Joint Chiefs of Staff said in a statement, cited by local media, that North Korea fired two unidentified projectiles into the sea off its eastern coast early on Friday morning. The South Korean military said the projectiles were fired from near the city of Tongchon of Kangwon Province into the East Sea, also known as the Sea of Japan.

"The military is monitoring the situation in case of additional launches while maintaining a readiness posture", the statement said, cited by AFP.

The South Korean Defence Ministry said earlier this week that Seoul plans to modernize its fleet of fighter jets within the next five years and seek more defence opportunities in space. South Korea's plan comes in the wake North Korea launching multiple projectiles, which Seoul has reportedly classified as ballistic missiles, over the past several weeks.

On Thursday, Japanese Defence Minister Takeshi Iwaya also stressed the need to strengthen surveillance efforts due to the possibility that North Korea could fire more missiles following its launches in recent weeks.

In an earlier statement following the previous missile tests, Kim said the tests were intended as a warning to South Korea and the United States to stop their simulated military drills, which the North Korean leader said violated the June 2018 agreement between him and Trump to cease such exercises.

North Korea has been engaged in denuclearisation talks with the United States since 2018. Kim and Trump expressed their commitment to this process at their first bilateral meeting in Singapore in June 2018.

The two leaders met for a second time in Vietnam in February 2019, but their talks finished abruptly without an agreement or a consensus on its conditions. While Pyongyang wants international sanctions on it to be lifted, Washington has insisted that Pyongyang first completely abandon its nuclear program.

000000
Popular comments
The North warned the dotard and their Seoul mates to the south. With advanced ICBM programs, every aggressor is fair game for NK.

arcsmith
16 August 2019, 03:12 GMT1
000000
They seem to underrate Kim's intellect but they should understand a fact that looks may deceive even the most clever functionaries who pig mouth trump cannot tolerate to work with cos