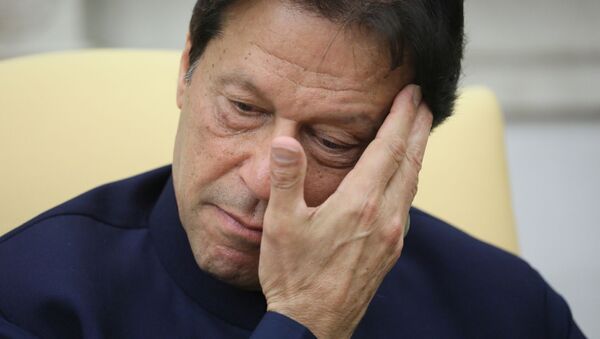 MOSCOW (Sputnik) - Pakistani Prime Minister Imran Khan has claimed that the silence of the international community on the possible threat of "genocide" against Kashmiri Muslims could lead to serious consequences, including a violent response from the Muslim world.

"Will world silently witness another Srebrenica-type massacre & ethnic cleansing of Muslims in IOK [India Occupied Kashmir]? I want to warn international community if it allows this to happen, it will have severe repercussions & reactions in the Muslim world setting off radicalisation & cycles of violence," Pakistan’s prime minister tweeted.

Explaining the move, Prime Minister Narendra Modi had said, Article 370 and 35A have given "nothing but secessionism, terrorism, nepotism and widespread corruption on a large scale to Jammu and Kashmir."

In an address to the nation last week, Modi claimed, these articles were used as a weapon by Pakistan to flare up people's emotions. "Due to this 42,000 people lost their lives in the last three decades," said Modi.

The massacre in Srebrenica, a town in western Bosnia that lies close to the Serbian border, was staged by the Bosnian Serb Army of Republika Srpska in July 1995 and left over 8,000 Bosniaks dead. The tragedy is one of the episodes of the Yugoslav Wars, which raged on the territory of the dissolved Socialist Federal Republic of Yugoslavia.