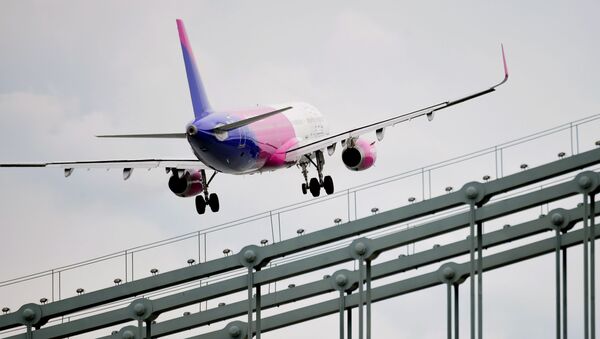 Norwegian South West police wrote on Twitter at around 9 am local time that they were heading to the airport after receiving a message of an intoxicated Icelandic man trying to break into the aircraft's control room.

"We are moving out to Stavanger airport after reporting a person who has disembarked on a plane. The plane has not landed yet, and we are on our way out to take care of the situation as soon as the plane is on the ground," Norwegian South West police wrote on Twitter at around 9 am local time.

The aircraft's crew had to restrain the man in his 60s, who was arrested by the police upon landing. According to the police, the man was calm as he was led away from the plane, though alcohol intoxication was likely to be behind the incident.

WIZZ air flight WZZ2427 Budapest-Reykjavik a passanger has attempted to storm the cockpit of the plane en route to #Iceland few hour ago and was forced to make an emergency landing at Stavanger #Norway pic.twitter.com/4AI1afCCPY

The man can face up to three years in prison if he is deemed to have endangered the aircraft or human life. Otherwise, he can be sent to prison for six months for breaching an instruction from the plane's crew.