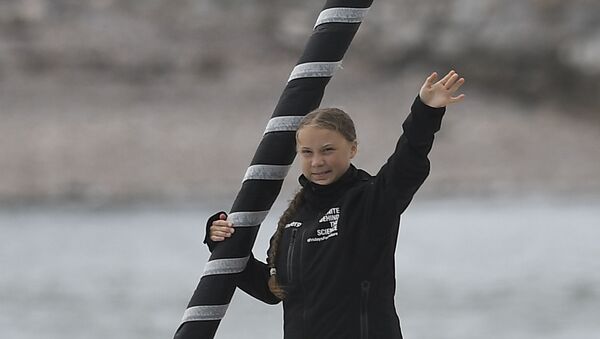 © AFP 2023 / Ben Stansall
Subscribe
International
India
Africa
Egor Efimchik
All materials
Greta Thunberg is currently en route to the United States on a solar-powered boat. She has stopped flying, citing the adverse climate impact of aviation, and is set to arrive in New York in two weeks.

Thunberg, 16, departed from the English city of Plymouth on Wednesday on a zero-emission sailboat bound for the United States. She is expected to set foot on American soil later this month and address world leaders at an upcoming UN climate change meeting.

Banks – the co-founder of the Leave.EU campaign, who is listed among “the bad boys of Brexit” in his own eponymous book – replied to a tweet about Thunberg’s voyage issued a tongue-in-cheek yet borderline warning that “freak yachting accidents do happen in August”.

He was immediately inundated with messages of condemnation saying his comment was “vile”.

grown man issuing veiled threats to a kid, this must be a very proud day for you

“It was a joke,” Banks replied to the critics, “you lefties have no sense of humour”.

“Obviously I don’t hope she encounters a freak yachting accident! I just enjoy watching the ludicrous tweeter mob following the next outrage,” he added, insisting that Thunberg was still “being used”.

The Swedish activist gained international fame when last August, then 15 years old, she began holding solo strikes outside of the national parliament every school day to press the lawmakers for action on climate change.

Her message has resonated well with many young people around the world, who joined an international campaign encouraging students to ditch school every Friday to call on lawmakers to commit to reducing carbon emissions and halting climate change.

The largest climate strikes took place on 15 March and 24 May, bringing together more than a million students each.

But the movement, and its firebrand leader in particular, has also provoked criticism for what some people described as climate-change alarmism and fearmongering. For instance, a group of conservative MPs boycotted Thunberg’s speech to the French parliament last month, calling her a “guru of the apocalypse” a “Justin Bieber of ecology”.