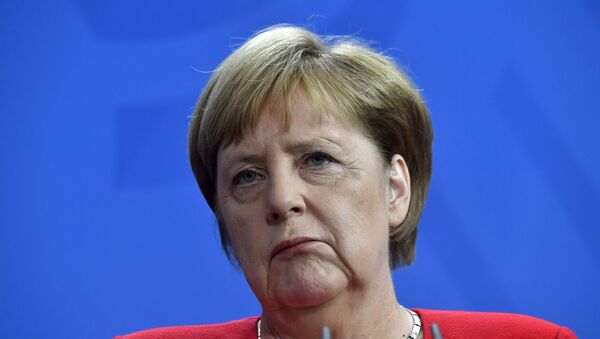 © AFP 2021 / John Macdougall
Subscribe
Egor Efimchik
All materials
The Brazilian government agency tasked with tracking Amazon deforestation has recently reported a huge spike in cleared areas in the rainforest, but President Bolsonaro stated that the data was misleading and fired the agency’s head due to differences over forest protection policies.

Brazilian President Jair Bolsonaro has lashed out at the German government after it announced the suspension of funding earmarked for Amazon forest protection projects.

“I would like to give a message to the beloved Angela Merkel,” Bolsonaro said on Wednesday, as quoted by Brazilian newspaper O Globo.

“Take your money and reforest Germany, OK?” he added, saying that this money is “much more needed” in Germany than in Brazil.

Berlin has provided about €95 million euros for Brazil’s environmental programmes in the past decade, but Schulze said €35 million ($39 million) would be withdrawn until the Brazilian government demonstrates commitment to curbing the growing deforestation rate in the Amazon.

The cut will not affect the Amazon Fund, the $1.28-billion forest preservation initiative supporting sustainability projects in one of the planet’s ‘green lungs’, to which Germany is a major donor.

In June, after German Chancellor Angela Merkel voiced concerns over the destruction of the Amazon rainforest, Bolsonaro quipped that Germany’s dependence on coal disqualifies it from the environmental debate (coal accounts for more than a third of Germany’s energy demand and just under 6 percent of Brazil’s).

"Their industry continues to be fossil, largely coal, and ours no, so they have a lot to learn from us,” he said.

Amazonia – the biggest rainforest on Earth – has been suffering from increased deforestation, recent studies report. About 17 percent of the Amazon rainforest has disappeared over the past 50 years, according to the World Wildlife Fund.

Deforestation has spiked under President Jair Bolsonaro, a climate change sceptic who wants to open vast Amazonian reserves to agriculture and mining.

The state-run National Institute for Space Research (INPE) has reported a 88-per cent increase in deforestation in June year-over-year, and said that cleared area increased 278 per cent between July 2018 and July 2019.

Jair Bolsonaro claimed that the statistics were “lies” meant to tarnish the image of Brazil and its government. He went on to fire INPE head Ricardo Galvao after suggesting that he was working for a foreign non-profit group.

000000
Popular comments
Under the occupation by crypto-Jews Germany has become rogue state meddling in other countries affairs, just like its criminal big brother USA. For example, Germany houses a Uyghur terror center in Munich and supports Islamic terrorism in China.

Vladimir Grindenko
15 August 2019, 15:03 GMT3
000000
Satellite images of "then and now" can prove who is lying, and who is not. I don't trust Bolsonaro. I can't understand why Brazilians voted for this self-admitted CIA pig?