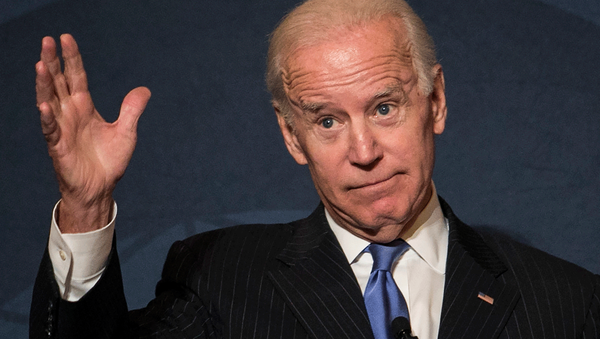 In an effort to limit verbal mistakes by 2020 Democratic presidential candidate Joe Biden, his advisers are considering limiting his public appearances, particularly late in the day, when he tends to say embarrassing things.

At 76 years old, has the silver-haired politician lost his silver tongue?

“A lot of people are nervous that he’s lost some of his mojo,” a major Democratic donor told The Hill Thursday. “They’re getting nervous about him going toe to toe with [US President Donald] Trump. But the problem is, there doesn’t seem to be an alternative.”

A quick search under “Biden gaffes” shows no shortage of discussion of the former vice president’s tendency to stick his foot in his mouth: is it or isn’t it too much of a problem, how does he compare to the infamously loose-tongued Trump, and much more.

A Thursday report by The Hill detailed how Biden’s campaign advisers were trying to cut down on Biden’s evening campaign appearances.

“Biden has a tendency to make the blunders late in the day, his allies say, particularly after a long swing on the road, like he had last week in Iowa,” The Hill’s Aime Parnes wrote. “They say something needs to be done to give the candidate more down time as the campaign intensifies in the fall.”

"He needs to be a strong force on the campaign trail, but he also has to pace himself," one unnamed Biden supporter told the publication.

However, David Axelrod, a political consultant who was a senior strategist and advisor to Barack Obama during his successful 2008 and 2012 bids for US President, disapproved of the strategy, calling it “bad advice” in a Thursday tweet.

This is bad advice. You can’t cloister the candidate and win.
He either can cut it or he can’t, and the only way he can prove he can is to be an active and vigorous candidate.
He’s running for president of the United States, for God’s sake!https://t.co/SCZmqVYapF

​“You can’t cloister the candidate and win,” Axelrod wrote. “He either can cut it or he can’t, and the only way he can prove he can is to be an active and vigorous candidate. He’s running for president of the United States, for God’s sake!”

However, other strategists dissented, with Democratic strategist Basil Smikle telling The Hill that with gab-gifted candidates like Massachusetts Sen. Elizabeth Warren and New Jersey Sen. Cory Booker on the rise, “the gaffes give credence to voters on the fence about him even as Trump has normalized worse language in public discourse.”

Nate Silver at number-crunching outlet Five Thirty Eight reported Thursday that, despite a week of high-profile gaffes, Biden wasn’t polling any lower across a wide variety of popularity measurements. In fact, voters seem more concerned with Biden’s septuagenarian status than his speaking slip-ups: an NBC News/Wall Street Journal poll in February that Silver noted was representative of the trend found that 62% of voters had reservations about voting for someone over the age of 75, regardless of political affiliation.

“Joe Biden has spoken his mind his entire life, which voters know and love about him,” Biden’s deputy campaign manager, Kate Bedingfield, told The Hill. “He’s a real person, he’s authentic, and that will never change. He’s going to keep taking on Trump and making the case to voters about the stakes we face in this election, regardless of how the press chooses to cover him.”

Last week, Biden made a series of verbal blunders, including telling an audience of Asian and Hispanic voters that “poor kids are just as bright and just as talented as white kids.” Biden also claimed he’d met with student survivors of a school shooting in Parkland, Florida, while vice president, when the shooting happened after he’d left office, and at the Iowa State Fair, said “we choose truth over facts.”

Trump, who’s nicknamed Biden “sleepy,” pounced on his errors, asking, “Does anybody really believe he is mentally fit to be president?”

Joe Biden just said, “We believe in facts, not truth.” Does anybody really believe he is mentally fit to be president? We are “playing” in a very big and complicated world. Joe doesn’t have a clue!

​The media has attacked Biden’s error-prone nature as well, with CNN’s Brianna Keilar asking senior Biden campaign adviser Symone Sanders on Monday, “Do you think voters care about this? And why should they overlook these gaffes?”

“This is a press narrative, not a voter narrative,” Sanders replied. “If you were to look at the coverage in Iowa this weekend and juxtapose the local newspapers and local television coverage to national media coverage you would have thought these reporters were at two different events.”

“If you put a camera in somebody’s face and a microphone on them and you follow them around 100 days, any one of us, I’m pretty sure we would be caught with a slip of the tongue. We would be caught making a mistake,” she told CNN. “The difference is Vice President Biden every single time has immediately corrected himself.”