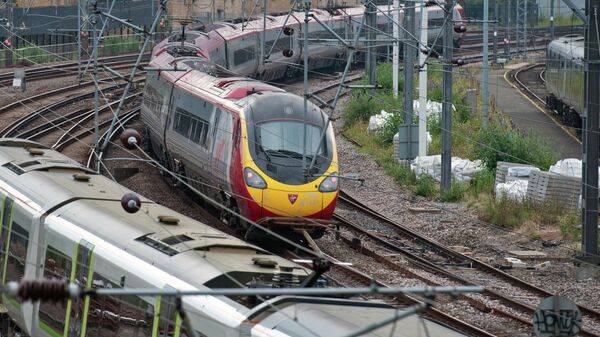 Campaigners and unions have warned that ever-higher train fares risk driving passengers off the railway, as a fresh increase of about 2.9% is expected to be confirmed on Wednesday, after a decade when fares have risen at double the rate of wages.

Ellen Lees, Campaigns Officer at We Own It, believes that commuters have every right to be angry at the proposed hike in rail fares.

Sputnik: This morning it was announced that rail fares in Britain would rise again by 2.7% promoting outrage from commuters and concern from unions and campaigners. Ellen, how significant is this 2.7% rise and what effect will it have for commuters?

Ellen Lees: I think people are rightly really angry about this. We've had to suffer through delays, cancellations, complete chaos on the roadways in the last couple of years and yet again our rail fares are going to go up by nearly 3% next year which means people paying for season tickets are going to pay hundreds of pounds more just to get to work every morning. It's just a rip-off. It's unacceptable in the age of climate breakdown when we should be encouraging people to take the train and buses more often than they take their cars or even domestic flights that people are being put off rail travel by the extortionate prices.

Sputnik: It seems rail fares a continuously rising every couple of months with no change to the services or provision. Can an increase in ticket prices really be justified following an ongoing decline in the quality of service and safety on Britain's railways?

Ellen Lees: You are absolutely right. I think it's completely unjustified. The privatised system that we have means that private companies that operate the franchises are continuing to take their profits, they're even negotiating to try to get franchise agreements, which means they have less risk to take on. They are, as always happens with privatisation, privatising the profits and nationalising the risk. We pay more and we have to deal with it when the franchise fails and when the government needs to bail them out, as happened to the East Coast Line, they get the cushy franchise which gives them almost guaranteed profits. It's just unacceptable. We're calling on Keith Williams, who's running the Williams rail review at the moment, to recommend public ownership and his White Paper in the autumn because that is the only way that we're going to stop the rip off and make rail travel a real option for people in this country.

Sputnik: With internal rail travel being more expensive than flights abroad what does the future hold for Britain's railways and moreover what changes should we be seeing from the government?

Ellen Lees: I think if we make the right choices now then the future can be very bright for the railways in this country. With climate change, we've got to start taking trains more often both domestically and abroad and that will require investment and it will require the government to take more control of the railways when they're in public ownership. If Keith Williams recommends public ownership now we can have a unified well-controlled railway that's coordinated and means bus services are joined up in city centres we've got a great unified public transport network that could really revitalise some of the rural areas in this country and can encourage people to take public transport when they're travelling.

Views and opinions, expressed in the article are those of Ellen Lees and do not necessarily reflect those of Sputnik.