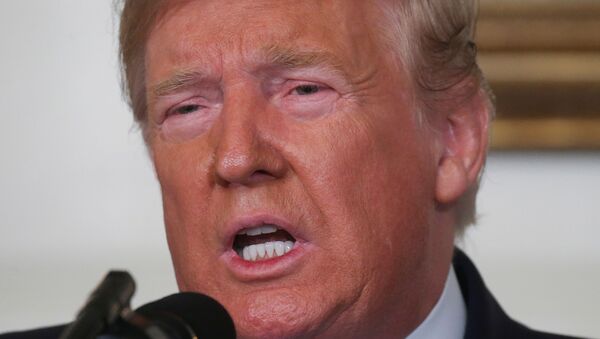 © REUTERS / Leah Millis
Subscribe
International
India
Africa
Multi-millionaire pedophile and convicted sex trafficker Jeffrey Epstein was found dead in his Manhattan jail cell on Saturday in mysterious circumstances. Epstein was assaulted prior to his death after reportedly telling guards that he believed he was targeted to be killed.

US President Donald Trump explained his retweet of a known conspiracy theory which attempts to connect the Clintons with the death of the convicted sexual offender and pedophile Epstein, reported The Hill.

The president tweeted the debunked conspiracy theory on Saturday, originally posted by Terrance K. Williams, which attempts to blame the death of Epstein on the Clintons.

The Hill report added that the connection has "no evidence" to support it.

The Trump tweet included an intentional inversion of the circulated #TrumpBodyCount hashtag, with his own #ClintonBodyCount and #ClintonCrimeFamily.

Trump told reporters prior to traveling to Pennsylvania for a campaign rally that it was "fine" due to the false idea being a statement from someone else and not himself.

"The retweet — which is what it was, it was a retweet — was somebody that is a very respected conservative pundit. So I think it was fine."

When asked if he believed that the Clintons were in truth connected to the death of Epstein, he said "I have no idea" but did highlight a relationship between former US President Bill Clinton and Epstein without mentioning that Trump himself boasts the same friendship.

He went on to demand a "full investigation" into the alleged suicide.

Clinton spokesman Angel Urena responded to the tweet with his own, calling Trump's tweet "Ridiculous" and "not true — and Donald Trump knows it."

Ridiculous, and of course not true — and Donald Trump knows it. Has he triggered the 25th Amendment yet? https://t.co/Pa8M8pAenr

Trump also has connections with Epstein, previously referring to him as a “Terrific guy" and "a lot of fun to be with. It is even said that he likes beautiful women as much as I do, and many of them are on the younger side.”

Trump said in 2019 that he and Epstein had a falling out and had not spoken.

"He was a fixture in Palm Beach. I had a falling out with him a long time ago. I don’t think I’ve spoken to him for 15 years. I wasn’t a fan."

Epstein's ties with celebrities, politicians, and royalty have been revealed, including US Presidents Bill Clinton and Donald Trump, as well as UK figures such as Prince Andrew and former Prime Minister Tony Blair.

All have denied any knowledge of Epstein's criminal behaviour and pattern of sexual abuse.

Attorney General William Barr said that the Department of Justice (DOJ) will look into “serious irregularities” at the Metropolitan Correctional Center (MCC), the prison where Epstein was found hanged on Saturday.

Barr previously blasted the MCC for its handling of Epstein.

‘"I was appalled, and indeed the whole department was, and frankly angry to learn of the MCC’s failure to adequately secure this prisoner," he said.