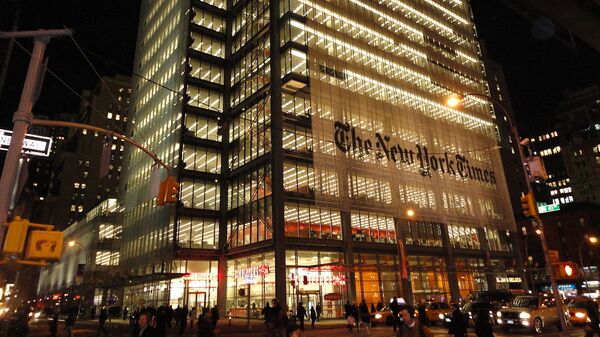 The editor faced accusations of racism over his tweets discussing the personas of US Congresswomen and a congressional candidate earlier this year.

The New York Times demoted deputy Washington editor Jonathan Weisman over a couple of tweets, removing him from the position of congressional editor and saying he will “no longer be active on social media,” Fox News reported Tuesday.

"Jonathan Weisman met with [Times Executive Editor Dean Baquet] today and apologized for his recent serious lapses in judgment. As a consequence of his actions, he has been demoted and will no longer be overseeing the team that covers Congress or be active on social media,” an edition spokesperson told Fox News in an interview. “We don't typically discuss personnel matters but we're doing so in this instance with Jonathan's knowledge.”

The decision was made over Weisman’s now-deleted July tweet, in which he responded to Senator Claire McCaskill, who claimed that the two Muslim Democratic Representatives, Rashida Tlaib and Ilhan Omar, are “truly from Midwest.”

"Saying @RashidaTlaib and @IlhanMN are from the Midwest is like saying Lloyd Doggett is from Texas or @repjohnlewis is from the Deep South. C’mon,” Weisman tweeted.

The tweet sparked fierce reaction from Dem Reps Alexandria Ocasio-Cortez and Omar, who took to Twitter themselves to express their indignation.

🤔 this will certainly be news to people of Minnesota’s 5th District! https://t.co/Im31ERKtW0

​Ilhan Omar was born in Mogadishu , Somalia, in 1982, and immigrated to the US when she was 12 years old. Rashida Tlaib was born into a family of Palestinian immigrants in the city of Detroit, Michigan, which is one of the 12 Midwestern US states, according to a Census Bureau definition.

Weisman also faced criticism in August after tweeting that the Justice Democrats organization supports congressional candidate Morgan Harper against Representative Joyce Beatty, who is black. Harper responded by claiming in a tweet that she is “also black.”

After author Roxane Gay mocked Weisman for his tweets and accused him of racism, the editor emailed Gay’s assistant, saying that the writer owes him an “enormous apology” for “misconstruing his rather innocuous tweet, willfully or mistakenly.”

“I accept Dean’s judgment. I think he’s right to do what he’s doing. I embarrassed the newspaper, and he had to act,” Weisman tweeted.