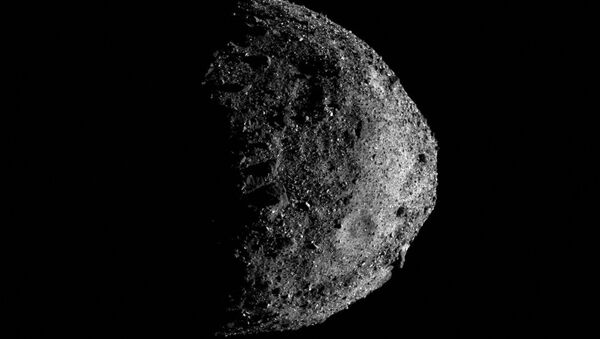 © NASA
Subscribe
Considered a “silent witness to titanic events in the solar system’s 4.6 billion year history” by NASA researchers, Bennu is a 1,600-foot rock that was branded an "apocalypse asteroid", located between Earth and Mars, weighing 87 million tonnes and currently orbiting the Sun.

A NASA mission has spent over 8 months sizing up the massive asteroid Bennu, located between Earth and Mars, to finally select four areas on its surface as possible sampling sites for its OSIRIS-REx spacecraft to grab a piece of space rock from in 2020.

The OSIRIS-REx experts have selected four sites to inspect more closely this autumn. Each area was given the nickname of a bird species found in Egypt, as the International Astronomical Union decided official names for features on the asteroid should refer to mythological birds.

The site dubbed Nightingale is in a crater within a crater and offers the most fine-grain material of the areas.

A much smaller crater closer to Bennu's equator holds the second potential site, Kingfisher, which is thought to contain hydrated minerals.
Osprey, within a small crater, appears to hold the most carbon-rich rock, and a crater in Bennu's southern hemisphere is home to the Sandpiper site - also likely to have water-rich rock.

The team behind the mission claims selecting the sites was more challenging than originally believed, as the surface was discovered to be much rockier than it appeared from a distance, after NASA captured an image of the 500-metre wide asteroid Bennu using its high-tech Osiris-Rex spacecraft.

"Although OSIRIS-REx was designed to collect a sample from an asteroid with a beach-like area, the extraordinary in-flight performance to date demonstrates that we will be able to meet the challenge that the rugged surface of Bennu presents," Rich Burns, OSIRIS-REx project manager at NASA's Goddard Space Flight Center in Maryland said in a statement.

The spacecraft nicknamed OSIRIS-REx arrived at the asteroid Bennu in December 2018, slipping into orbit at the end of that year. Ever since, it has been mapping the asteroid's rocky surface in great detail.

The OSIRIS-REx team will pinpoint the final sampling site and a backup site in December, intending to carry out the sampling manoeuvre in the second half of next year.

Scientists are hoping to begin studying the gathered material in September 2023.

Interestingly, recent research shows the "apocalypse asteroid" is spinning ever more quickly as it zooms through space. Scientists at the University of Arizona studied data from the OSIRIS-REx probe to discover that the asteroid’s rotation is speeding up by a second each century.

Scary as this sounds to the layman, the discovery might be good news, claim experts, as it means Bennu may “lose pieces of itself or blow itself apart”, minimising its potential destructive power.

“As it speeds up, things ought to change, and so we’re going to be looking for those things and detecting this speed up gives us some clues as to the kinds of things we should be looking for,” said Mike Nolan, a senior research scientist at the Lunar and Planetary Laboratory at the University of Arizona.

Asteroid Bennu is as wide as five football fields and weighs around 79 billion kilograms, which is 1,664 times heavier than the Titanic, according to scientists, who claim it has a negligible, 1 in 2,700-chance of striking Earth between 2175 and 2199.

“We’re not talking about an asteroid that could destroy the Earth. We’re not anywhere near that kind of energy for an impact,” said Nasa Osiris-Rex principal investigator Dante Lauretta back in 2016.