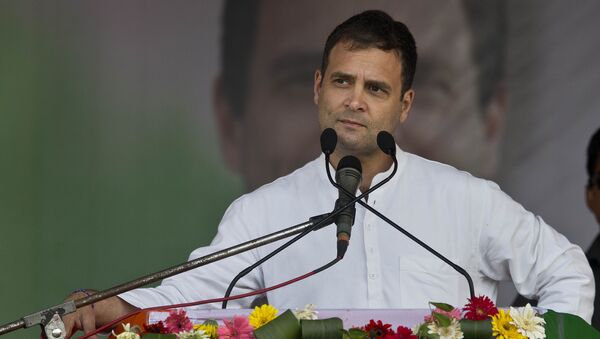 New Delhi (Sputnik): The Governor of India’s Jammu and Kashmir engaged with opposition Congress leader Rahul Gandhi in a verbal duel over the situation in the state, with the former inviting Gandhi to visit Kashmir to see for himself the reality on the ground there.

Rahul Gandhi tweeted on Wednesday accepting Malik's invitation, but said, only with no strings attached.

I accept your invitation to visit Jammu & Kashmir and meet the people, with no conditions attached.

When can I come?

The barb between the two started on Sunday 11 August, when the former Congress President said, “reports of unrest are emanating from Jammu and Kashmir, where the government has imposed a media and communications blackout.” He had asked the government to “take urgent steps to ensure the safety of every citizen and lift the veil of secrecy”.

Reports of unrest are emanating from J&K where the Govt. has imposed a media & communications black out.

I urge the Govt. to take urgent steps to ensure the safety of every citizen in J&K and to lift the veil of secrecy. pic.twitter.com/hZCHyhSXkW

Malik, in a mocking response, told Rahul Gandhi that he would send an aircraft for him to visit Kashmir to take stock.

"I have invited Rahul Gandhi to come here. I will send you a plane to observe [the situation] and then speak up. You are a responsible person, and you should not speak like this," Malik said.

In response Rahul Gandhi said, he doesn't need an aircraft- only to be allowed to visit Jammu, Kashmir and Ladakh, "ensure us the freedom to travel and meet the people, mainstream leaders and soldiers".

A delegation of opposition leaders & I will take you up on your gracious invitation to visit J&K and Ladakh.

We won’t need an aircraft but please ensure us the freedom to travel & meet the people, mainstream leaders and our soldiers stationed over there. https://t.co/9VjQUmgu8u

The state has been witnessing unrest for almost four decades, which India claims is ignited by Pakistan. Kashmir has been a bone of contention between the two countries since they gained freedom from British colonial rule in 1947. Both govern the region in parts but claim it in full. They also fought two wars over Kashmir.