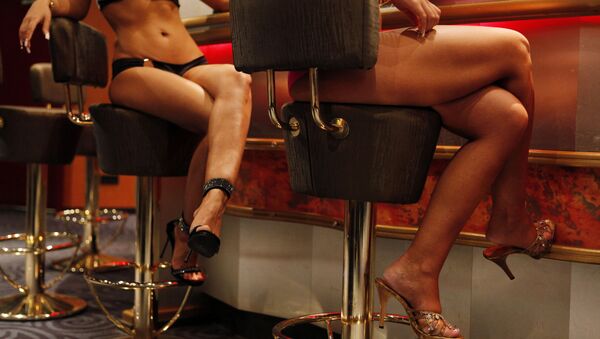 © AP Photo / Franka Bruns
Subscribe
Svetlana Ekimenko
All materialsWrite to the author
There has been an increasingly heated debate in Berlin about street prostitution, particularly in Mitte district, which has a history of sex workers, and on measures that might be taken to safeguard the safety of sex workers.

The mayor of Berlin’s central Mitte district, Stephan von Dassel, has made a statement proposing to install “Verichtungsboxen” boxes, booths where prostitutes could receive their clientele, with the parking areas of former Tempelhof Airport suggested as one of the sites.

When asked about other potential venues for the sex booths, the official also suggested the central fairground in the Mitte district, or the area under the viaduct of the U2 line at the Bülowbogen.

The mayor said the proposed sex venues would include drive-in booths where customers can meet sex workers in their own vehicles.
The mayor’s statement came as part of a heated discussion about street prostitution in Mitte district and how to improve the safety of Berlin's sex workers.

Regarding street prostitution on Kurfürstenstrasse, an upmarket street in Mitte, von Dassel insisted sex boxes might be set up on the condition the street was declared a restricted red-light district.

In his statement on 22 July, Stephan von Dassel deplored the current plight of sex workers in Berlin as “inhumane”.

“By accepting the current situation, the state of Berlin tolerates and promotes forced prostitution, violence against women and drug addiction by women in existential distress,” he said.

“Publicly controlled performance boxes can improve working conditions, especially women's safety, and reduce the negative impact of prostitution on the living environment. Performance boxes only bring about an improvement in the overall situation, even if they can be used by a car and another public practice of sex work is restricted by a Restricted Area Ordinance,” said the mayor.

Tempelhof Airport was a Nazi airfield during WWII, and later served as an emergency shelter for Syrian refugees. It's currently a public park, where people come to rollerblade and cycle on the old airstrip, and attend concerts and festivals.