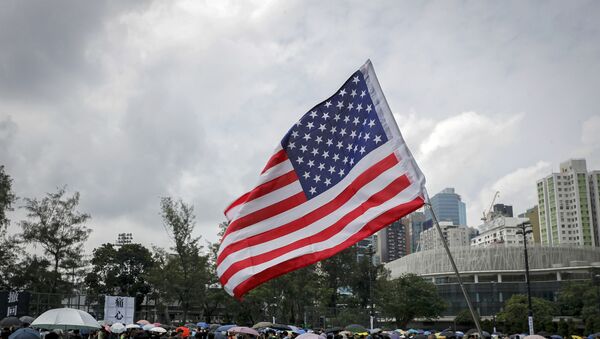 Egor Efimchik
All materials
US President Donald Trump claimed on Tuesday he had intelligence at hand that China was deploying troops at the Hong Kong border. Beijing has repeatedly warned foreign nations against interference in its internal affairs.

China has called on the United States to stop meddling in Hong Kong, the day after President Donald Trump weighed in on the ongoing protests that continue to rattle the Asian financial hub.

China's Foreign Ministry has stated that Hong Kong, a semi-autonomous region in southern China, falls exclusively within the domain of its domestic affairs.

The foreign ministry has also urged the US to stop "prying into Hong Kong affairs".

The comments came in response to Donald Trump's claims that Chinese troops have been moving to the border with Hong Kong.

The ministry on Tuesday accused the United States of inciting chaos after some US lawmakers, including House Speaker Nancy Pelosi and Senate Majority Leader Mitch McConnell, condemned what they called a violent crackdown on Hong Kong protesters.

"The US has denied its involvement in the ongoing violent incidents in Hong Kong on many occasions," said ministry spokeswoman Hua Chunying. "However, the comments from those members of the US Congress have provided the world with new and powerful evidence of the country's involvement."

Donald Trump said he “can’t imagine why” anyone would blame the US for the Hong Kong controversy.

Tensions have been high in Hong Kong over a proposed bill that would allow extraditions to mainland China.

Although Carrie Lam's Beijing-backed government indefinitely suspended the bill following the demonstrations, which often resulted in violent clashes with police, people continue to protest, demanding that it be withdrawn completely. The protests have also gradually evolved into a broader movement demanding political reforms.

Britain handed the territory over to China in 1997, and it has since then enjoyed autonomy in all fields except diplomatic relations and defence matters, so local residents are concerned that the law, if implemented, would effectively take away their freedoms.

While the US and the United Nations have both openly supported the protesters, China has accused them of having shown a "tendency of resorting to terrorism" by blockading Hong Kong's airport and attacking police with petrol bombs.

Carrie Lam said on Tuesday that the rallies are turning Hong Kong into a "dangerous city" and that violence during protests would push it to a point of no return.