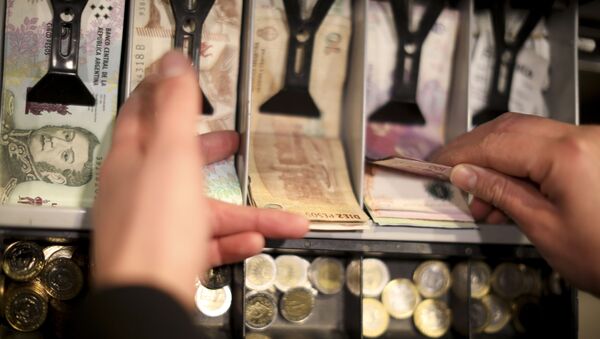 BUENOS AIRES (Sputnik) - Argentine President Mauricio Macri on Wednesday called on opposition forces to start talks with him after his shock defeat in the presidential primaries caused a market meltdown.

"I am absolutely convinced that dialogue is the only way forward… The past 48 hours prove that politics have done us a lot of harm and that we must act responsibly", Macri said in an address to the nation.

The national currency dropped nearly 30 percent against the US dollar on Monday, a day after the conservative president was beaten in the race for the presidency by his leftist opponent, Alberto Fernandez.

He conceded his defeat in Sunday’s primaries ahead of this October’s election. His ticket won 32.1 percent of the vote against Fernandez’s 47.7 percent. Macri said he respected those who chose to vote against him.

Macri was elected in 2014 on the hopes of bringing about liberal economic policies but was soon forced to take a loan from the International Monetary Fund to shore up the slumping economy. The running mate of his main rival, ex-President Cristina Kirchner, advocates stricter government controls.