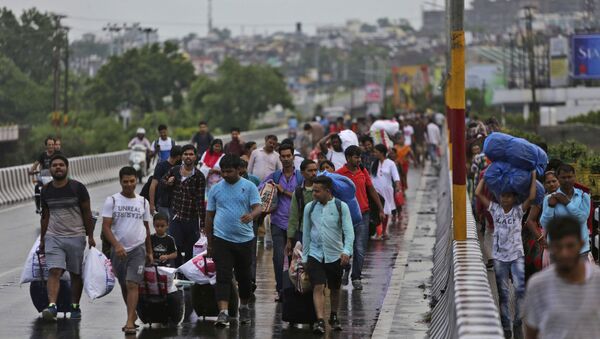 New Delhi (Sputnik): Pakistan's protest to the UN Security Council in the wake of India revoking the special status of Jammu and Kashmir and its subsequent division into two centrally administrative units, is unlikely to garner much support, says an Indian strategic expert.

India's Kashmir move caused a diplomatic row with Pakistan, with trade links suspended, communication links cut and New Delhi's envoy expelled. China too has said that India declaring the region of Ladakh as a union territory is a direct challenge to Beijing's sovereignty over the region.

Bur Harsh Pant, Director of Studies and the Head of the Strategic Studies Programme at the Observer Research Foundation, believes that the dispute is unlikely to change the situation on the ground.

Sputnik: Indian External Affairs Minister S. Jaishankar while meeting his Chinese counterpart talked of the need for “mutual sensitivity” to take forward the India-China relationship. What do you make of it?

Harsh Pant: India has reiterated its stand that the Indo-China relationship could only move forward if both New Delhi and Beijing are receptive towards each other’s core security concerns.

On the key territorial issues of Tibet and Taiwan, India has always taken a stand which has been favourable to China. New Delhi therefore expects a reciprocal favourable position from Beijing on India’s own territorial concerns including the border disputes in Jammu and Kashmir and perpetration of acts of terrorism from the Pakistani side.

Sputnik: Pakistan envisages taking the Kashmir issue to the UN Security Council. With regard to Pakistan approaching global players including China, do you feel India’s recent move has actually globalised the Kashmir issue?

Harsh Pant: The Chinese response to Pakistan raising the Kashmir issue hasn’t been that favourable as China was categorical that the territorial dispute has to be solved between India and Pakistan bilaterally.

Pakistan is well within its rights to approach the UNSC, but it is to be seen as to what kind of traction they receive. So far, the stand put forward by every member of the UNSC has been that India’s abrogation of Article 370 is their internal matter. If any furore on Kashmir was to happen at the global level, it would have happened already.

Sputnik: China has said the Indian government's converting Ladakh region as a separate federal unit, is a challenge to its sovereignty. Do you see the issue escalating?

Harsh Pant: The Chinese statement on Ladakh underscored their continuing claims on parts of its border with India. These claims are not new and have been a long standing tradition of Chinese foreign policy.

On the ground, nothing substantial has changed as far as the Ladakh territorial dispute is concerned. Even after the recent developments, the Indian government has made administrative arrangements only in the parts which it was already governing.

India doesn’t envisage any plans to launch an offence to annex those territories which are presently administered by China on the Ladakh side or by Pakistan on the Kashmir side. Hence, the on-ground status quo is expected to remain the same.

Sputnik: The Taliban recently gave an unprecedented statement on Kashmir.  Amid media reports of alienation and unrest among people in the Kashmir Valley following removal of the State’s special status. Do you feel that the Taliban poses a threat for India?

Harsh Pant: The Taliban has always posed a threat for India. However, their recent statement could be seen as a positive for the country as it stated that Pakistan should not be looking to relate the Kashmir issue with Afghanistan.

While they did mention about the alienation faced by the people of Kashmir, they are surely not part of the Taliban’s core concerns as the body presently has bigger things on its plate.

India is cognisant of the fact that if Taliban or any of its allies gaining control in the Kashmir region would have a cascading affect. The move by Indian government to bifurcate the state and put into two administrative units under the direct control of the federal government has been made in keeping view of these threats.