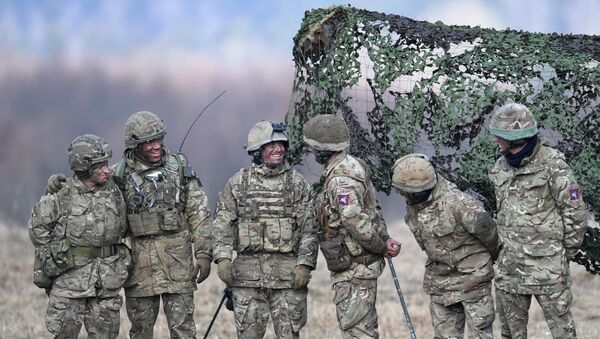 © AFP 2021 / CHRISTOF STACHE
Subscribe
Zara Muradyan
All materials
The UK Armed Forces have maintained a presence in Germany since the end of World War II, but as far back as 2010 then-UK Prime Minister David Cameron announced the early withdrawal of all British troops from Germany by 2020.

The British Army is in the middle of what has been described as "the biggest relocation exercise in UK modern history" as it's bringing 11,000 personnel, including troops and their families, back home from Germany, the Daily Express reported.

Most of them will reportedly be repatriated to Salisbury Plain in Wiltshire and based in the three garrison towns of Bulford, Tidworth, and Larkhill, where hundreds of houses have been built for returning families over the past four years.

The Ministry of Defence has not commented on the reports so far.

The alleged move is part of a David Cameron-era plan to pull out 20,000 British troops from German soil by 2020, even though they had previously been set to remain until 2035.

They have been stationed in Germany since the end of the Second World War, but in October 2010, British Prime Minister David Cameron announced the early withdrawal, contending that there was "no longer any operational requirement for the UK to be based there, and the current arrangements impose financial costs on the UK, disruption on personnel and their families and opportunity costs in terms of wider army coherence".

Over the weekend, The Guardian referred to data released by the UK Defence Ministry under a freedom of information law in its report, alleging an ongoing army recruitment crisis in Britain.

According to the figures, combat units are operating 40 percent below strength, while the number of troops in infantry regiments had reduced steadily in a five-year span (from 2014 to 2019).

000000
Popular comments
UK armed forces' presence in Germany has been an expensive anachronism for many years. It's long past time to bring them all back.
Medvezhonok
12 August 2019, 15:59 GMT2
000000
As long as they don’t send them to Iraq later for ISRAEL/usa’s war against Iran.