'Time is Running Out': Pompeo Doubles Down on Claim of Tehran's 'Destabilizing Behavior' 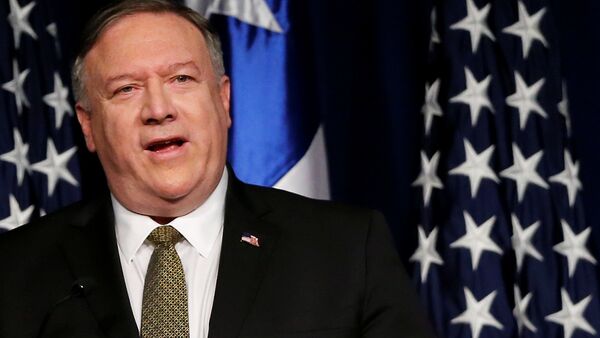 The clock is ticking. Time remaining before the UN arms embargo on Iran expires and Qasem Soleimani’s travel ban ends. We urge our allies and partners to increase the pressure on the Iranian regime until it stops its destabilizing behavior. https://t.co/oxsXNiJ4Q3 pic.twitter.com/o4HpES3GKs

The United States has imposed several rounds of sanctions against Iran since withdrawing from the Iran nuclear deal, formally known as the Joint Comprehensive Plan of Action (JCPOA), in May 2018. It took Washington less than a year to reinstate sweeping sanctions against the Islamic republic, prompting Iran to begin stockpiling low-enriched uranium.

The Trump administration has sanctioned the Islamic Revolutionary Guard Corps (IRGC) as a terrorist group.

Moreover, since 5 May, Washington has been building up its military presence in the Persian Gulf, alongside Saudi Arabia, the United Arab Emirates and Bahrain, as part of an informal axis against Iran.

Throughout the deterioration of relations, the Iranian government has been defiant, warning that any serious encroachment on the country’s sovereignty will be met with an appropriate response.

Iran and the United States also remain locked in confrontation over alleged Iranian attacks on shipping in the Persian Gulf and Strait of Hormuz and the US buildup of naval and air force power in the region.

In particular, four oil tankers — two Saudi, one Norwegian, and one Emirati — were allegedly attacked near the UAE port of Fujairah. The following month, two other vessels — Japanese and Norwegian — were targeted in a similar incident in the Gulf of Oman, near the Strait of Hormuz.

Iran has tightened its control over the Strait of Hormuz and the Persian Gulf after its Grace 1 supertanker was detained on 4 July by the Gibraltar authorities. While the detention was motivated by suspicions of oil smuggling to Syria in violation of EU sanctions, some accused the UK Overseas Territory of acting on US orders. In response, Iran seized on 19 July the British-flagged Stena Impero tanker, which is now in Bandar Abbas port.

Iran subsequently shot down a US surveillance drone over the coastal Hormozgan area, prompting threats from the United States.

Iranian Foreign Minister Mohammad Javad Zarif has accused the United States and its allies of turning the Persian Gulf region into a "matchbox ready to ignite", according to Reuters, citing the diplomat's recent interview with the Al Jazeera broadcaster.

Iranian President Hassan Rouhani has urged, in turn, for peace and warned that any war with Iran would be "the mother of all wars".

000000
Popular comments
Whose destabilizing behavior, Mr. Pompeo? I see only the US and Israel trying their best to start a war on Iran. Trump clearly wants to lose the 2020 election when the world dives into the depression of the century! Mr. Pompeo, did you ever ask yourself what happens when the strait closes and Iran destroys all the oil and gas installations across from the strait? You don’t know what you are talking. Close to $1quadrillion in derivatives defaulting. Good luck with that Mr. Pompeo.
Regula
13 August 2019, 02:38 GMT11
000000
Ridiculous propaganda and fear mongering on behalf of zionist & saudi interests.