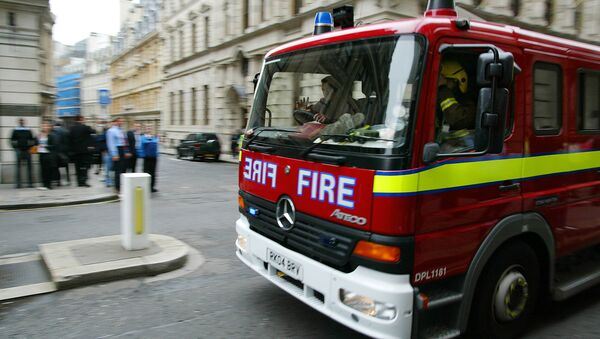 MOSCOW (Sputnik) - Around 100 firefighters have tackled a fire that ripped through a building housing a restaurant in the affluent Notting Hill neighbourhood in West London, the fire brigade said.

"Fifteen fire engines and around 100 firefighters have been called to a restaurant fire in a building containing shops and flats on Westbourne Grove in Notting Hill", the statement read.

The flames spread through the restaurant on the ground floor and affected the basement. Around 16 people were evacuated. There were no reports of injuries, the fire authority said.

Road closures on Westbourne Grove due to a fire pic.twitter.com/Z7AhACrDzu

​"Firefighters are working hard to bring the blaze under control. While operations continue we'd ask for people to avoid the area if possible", fire official Keith Carmichael said.

Fire in Westbourne Grove. The situation at around 8.45 this morning pic.twitter.com/kP8OSbgw7U

​Firefighters were called shortly before 7 a.m. (6:00 GMT). Efforts to put out the blaze are expected to continue throughout the afternoon. They are being complicated by a partial ceiling collapse.

Always something going on.. 15PF in Westbourne Grove earlier this morning. 75 Firefighters worked in difficulty conditions to bring the fire under control. @LFBWestminster @LFBtomgeorge pic.twitter.com/7z3q0Z1t53