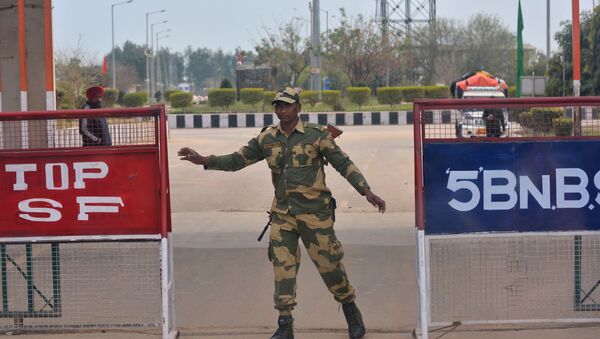 New Delhi (Sputnik): The tradition of exchanging sweets between Pakistani Rangers and India’s Border Security Force during Eid has become the latest remnant of diplomacy to suffer as a result of the ongoing diplomatic row over Kashmir.

On Monday, Pakistani Rangers refused the traditional exchange of sweets offered by India on the festive occasion of Eid-Al-Adha at the Wagah border point in Amritsar, where Indian Border Security Forces traditionally offer sweets to Pakistan's Rangers to mark the holiday.

The refusal came against the backdrop of rising tensions between the two nuclear-armed countries in the wake of India revoking Article 370, which granted special status to the people of Jammu and Kashmir for seven decades.

For decades, Indian and Pakistani forces have traditionally exchanged sweets and gifts on festivals like Diwali, Eid, New Year, as well as on Independence Day and Republic Day.

Even at the height of the February escalation when the two countries had reached a war-like situation, the two forces had exchanged sweets at nearly a dozen points along the Line of Control (LoC) and International Border (IB) and in Jammu and Kashmir this June during Eid-ul-Fitr.

Pakistan already suspended diplomatic relations including all people-to-people contacts and halted bus and train services between the two countries last week. On Saturday, Pakistan suspended trade with India through an integrated check post (ICP) at the Attari border.

Ahead of the current stand-off over Kashmir, the leaders of the two countries had exchanged pleasantries on several occasions, including the first-ever direct telephone call between Indian Prime Minister Narendra Modi and his Pakistani counterpart Imran Khan.

The two leaders had also exchanged greetings in Bishkek during the annual summit of the Shanghai Co-operation Organisation.

Earlier this month, the Indian government repealed Article 370 of the country's Constitution that had granted special status to Jammu and Kashmir since 1947 and divided it into two federally administered territories.