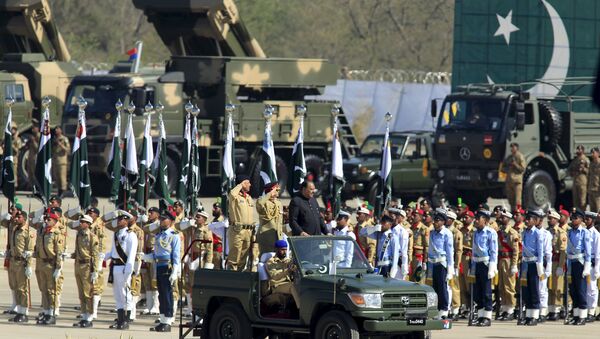 © REUTERS / Faisal Mahmood
Subscribe
New Delhi (Sputnik) – General Qamar Javed Bajwa was addressing army troops during his visit to the Line of Control (LoC) in the Bagh sector of Pakistan-administered Kashmir on the occasion of the Eid ul Adha festival.

Pakistan’s Chief of Army Staff General Qamar Javed Bajwa on Monday said that Islamabad had initiated multiple steps to redress the ongoing crisis in Kashmir after the government of India revoked the special status provided to the Indian-administered state of Jammu and Kashmir.

General Bajwa claimed that the Indian government is trying to shift the international community's focus away from the situation in India-administered Kashmir so "it can do anything" there, adding that Pakistan would speak out against the alleged crimes committed by Indian forces in the region.

“We must not give them any opportunity to cover up the crimes it is committing in Jammu and Kashmir”.

On the occasion of the holy Muslim festival, General Bajwa also added that the Pakistani Army would observe Eid in solidarity with the Muslims of Indian Kashmir.

“We stand with our brothers and sisters in Kashmir and no matter how much time and whatever effort it takes, we will prove equal to the challenge Pakistan Army is observing Eid solemnly in solidarity with Kashmiris", the Pakistani Army quoted him as saying in a statement posted on its website.

Meanwhile, on raising the Kashmir issue before the international community, Pakistan’s Foreign Minister Shah Mehmood Qureshi on Radio Pakistan said that Prime Minister Imran Khan, in his wider outreach efforts, had contacted world leaders, including those of Turkey, Iran, and Indonesia to apprise them of the ongoing crisis in the region.

The foreign minister also added that if there is any armed aggression from the Indian side amid the escalating tensions, the Pakistani forces would “reserve the rights” to defend themselves. 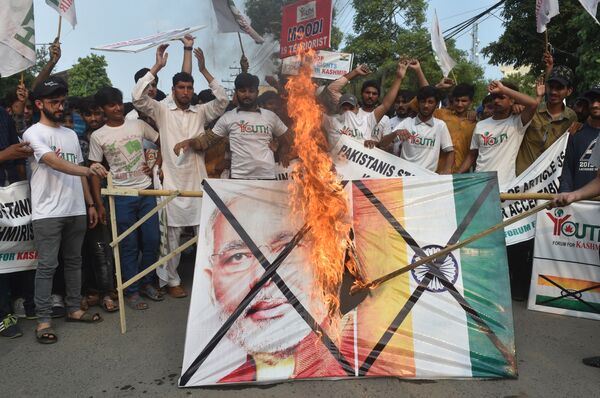 Pakistani activists of the "Youth Forum for Kashmir" group shout slogans as a a picture of Indian Prime Minister Narendra Modi and Indian flag is burned during a protest in Lahore on August 5, 2019, in reaction to the move by India to abolish Kashmir's special status
© AFP 2021 / ARIF ALI

The situation in the state of Jammu and Kashmir has been tense since the Indian parliament scrapped a previously granted special status to the region, turning it into a union territory in addition to declaring Ladakh a separate one. The new system is likely to come into effect in October.

Ahead of the unprecedented move, the government pushed prohibitory orders in Kashmir and took all political leaders of regional parties into preventive custody.

India's move sparked a diplomatic row with Pakistan and in the response, Islamabad has expelled New Delhi's envoy to the country, as well as suspended trade, and communication links.