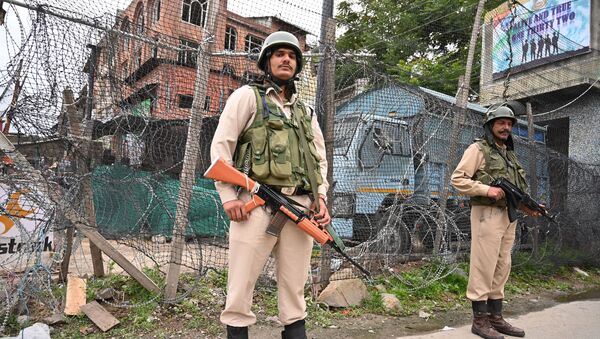 © AFP 2021 / TAUSEEF MUSTAFA
Subscribe
New Delhi (Sputnik): Amid reports of an unprecedented clampdown on communication services, India's Central Reserve Police Force (CRPF) on Monday categorically denied reports of a serious rift with local police over the movement of people in the state.

The CRPF has issued a statement against rumour mills doing the rounds in the valley that a Kashmiri policeman shot dead five reserve police force personnel after they refused to let a pregnant woman visit hospital for not having a curfew pass.

"As always, all the security forces of India are working with coordination and bonhomie. Patriotism and our tricolour lie at the core of our hearts and existence, even when the colour of our uniforms may differ", CRPF tweeted while calling the report malicious and "absolutely baseless and untrue".

​Wajahat Saeed Khan, an Emmy-award nominated Pakistani multimedia journalist currently working at Columbia University in New York, claimed a policeman had launched a "blue on blue" attack against the CRPF after they refused to let a pregnant woman go because she didn’t have a curfew pass. "Things on edge since that attack", Khan warned.

Restrictions on the movement of locals have been in place since 5 August, when the Indian government abrogated Article 370 of the Indian Constitution which had granted special status to the state of Jammu and Kashmir since 1947.

Local authorities have issued a restriction pass, known as a "curfew pass", to some people - i.e. not everyone in the valley is allowed to move.

S.P. Pani, inspector general of police, Kashmir Zone, also refuted the claim made by several Twitter handles and said that the matter has been taken up with @TwitterSupport for action. "These twitter handles have been operating from outside of the valley", Pani added.

With communication lines down and the Internet blocked, rumours about incidents have been spreading in the valley for the last week, including murmurs that arms had been taken away from Jammu and Kashmir police.

State Chief Secretary and Police Chief Dilbagh Singh clarified that people should not believe any mischievous and motivated news regarding firing incidents in the valley.

The government, including the Ministry of Home Affairs, has claimed that not a single bullet has been fired since 5 August.

Meanwhile, a group of journalists directly or indirectly linked to the Kashmir situation are sharing their versions of the prevailing situation in the state.

According to Indian journalist Vijaita Singh, who has been covering the incidents from the Kashmir Valley since 10 August, at least 40 boys and men have been hit by pellet gun fire and admitted to two government hospitals in Srinagar.

Another journalist, Saraswati Das of Live Mint daily, posted visuals of stone pelting incidents that occurred amid celebrations of Eid-ul-Adha; it also showed that the state observed complete shutdown. There were incidents of heavy stone pelting, while all the main mosques remain out of bounds for people.

​Meanwhile, India's Ministry of Home Affairs on Monday said that restrictions on connectivity continue as a result of security requirements.

However, people are being facilitated to contact their relatives outside the state through a widespread deployment of helplines at convenient locations, such as the Deputy Collector's office, police stations, and police posts.

"Over 5,000 calls were made in one day in Srinagar. Over 300 public points for phone connectivity are functional across the Kashmir division", the Home Ministry claimed.

arcsmith
12 August 2019, 19:28 GMT
000000
arcsmith, Is that Kashmir situation so bad that even tlelphone or internet werent there so one can send a message to New york?