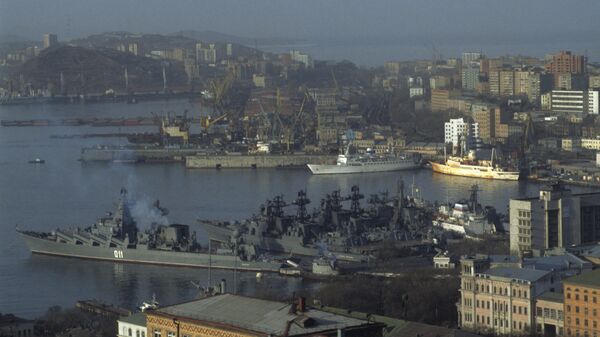 VLADIVOSTOK (Sputnik), Valentina Shvartsman - India and Russia are discussing potential cooperation in gas exploration and supplies from the Russian Arctic region, according to Indian Commerce and Industry Minister Piyush Goyal.

"Both ministers of India and Russia with energy companies in Russia are discussing what we can do particularly in the Arctic region for gas exploration and supply to India", Goyal said.

The minister also expressed the hope for Russia’s larger involvement in the Indian energy sector.

"Going forward we look at Russia as a trusted partner in the energy field. We would like them to play a greater role in the transformation of the [Indian] energy sector towards a gas-based economy", he said.

Goyal also added that India and Russia expect to sign over a dozen memorandums of understanding (MoUs) during Prime Minister Narendra Modi's visit to the Eastern Economic Forum (EEF) in Vladivostok in September.

"When the prime minister will visit the EEF, we will have over a dozen MoUs that are planned to be executed at that time, some of which we are discussing today and will finalise over next 20 days", Goyal said.

Additionally, India and Russia will sign five memorandums of understanding (MoUs) on cooperation between the South Asian nation and the Russian Far East on Monday, according to Goyal.

The minister noted that the Indian delegation's visit to Vladivostok was "in some sense" a preparation for the upcoming EEF in Vladivostok.

"For the EEF we will have the prime minister accompanied by a very high-level delegation of government leaders and businesspersons", Goyal said, noting that Modi's delegation would be smaller than the one visiting Vladivostok now, but more high-ranking.

According to the minister, the current visit, along with the upcoming meetings on the EEF sidelines, will enable the two countries to "easily" achieve the target of $30 billion in bilateral trade by 2025.

India is interested in providing services in the area of training workers of the Russian diamond sector, Indian Commerce and Industry Minister Piyush Goyal said.

“We are also seeing certain products where we can look at skilling the Russian people for carrying out activities of production and processing, for example, the diamond industry is coming in a big way to explore the potential in the Far East. You have a lot of diamond manufacturing, but the processing is not done in Russia. I am going to discuss with Russian leaders to see how we can skill Russian people also to understand how to process diamonds”, Goyal said.

The Indian minister noted that the Russian Far East provided big opportunities in the mining sector in general, including mining cooking coal, aluminium, bauxites, copper, lithium, with the latter being of particular interest to India.

He added that not only vocational training, but also higher education exchanges were on the agenda of bilateral discussions.

“Yesterday I spent a lot of time with [Russian Far East] Minister Alexander Kozlov, and one of the thoughts that I shared with him was that as they are expanding their education facilities on the engineering side or on the medical side, we have some very prominent and very reputed educational institutions in India, like the Indian Institute of Technologies, the All-India Institute of Medical Sciences … which can help to bring very high-quality education to the Far East”, Goyal said.

The minister added that the Russian Far East's ceramics, tourism, agriculture and dairy production sectors were also of particular interest to India.

Goyal expressed his belief that Indian companies are interested in supplying food products to the Russian Far East, as well as opening special processing and packaging facilities for further distribution to different parts of the country.

"There were some companies here that are looking to supplying products to Vladivostok, processing and packaging it in Russia to suit the Russian taste and then supply it to both the Far East and other parts of Russia also … This is the area under discussion, but it may take some time before we can really finalise it", the Indian minister said.

The official, in particular, named production of instant food, including from Basmati rice, in the Far East as one of the possible projects.

India is hoping to launch direct flights between the Russian Far East and the Indian capital city as part of efforts to boost bilateral business cooperation, Goyal said.

"That is one of the areas that I would like to discuss today with the Russian leadership because I believe that will be a first step to have greater engagement between Russia and India, particularly the Far East region. I am sure we can mutually work out a matter by which we can have more direct flights between the Far East, at least, to begin with, Vladivostok and Delhi … This will give a big boost to business on both sides", Goyal said.

The minister noted, however, that he did not have any specific timeline for launching direct flights between the Russian Far East and India.

"It is a thought that has only come last night, so it is too early to put a time frame to it. But we will start the discussions today, and we will try to speed up the process so that we could do it quickly", Goyal said.

The minister noted that the port infrastructure in the Far East needed to be upgraded so that it can take more large vessels. He added that facilitation of visa procedures in both countries was also on the agenda of his talks with Trutnev.

"I think that it is an important first step to expand people-to-people and business-to-business exchange, and, therefore, potential trade between the two countries", Goyal said.

The minister also touched upon a return visit to India by Russian businesspeople.

“I would think that it would be a logical outcome of any such engagement, because ultimately it is partnership that will define the success of the Indian-Russian joint ventures. I am quite confident that going forward we will see more and more Russian businesspersons also coming to India to discuss potential opportunities together, whether it’s in Russia or in India. The more the engagement between the two countries, the more, I think, we will be able to further the strong relation that [Russian] President [Vladimir] Putin and [Indian] Prime Minister [Narendra] Modi have”, Goyal said.

The minister also did not rule further exchanges between Russian Far Eastern governors and Indian chief ministers. He noted the decades-long relationship between the two countries, stressing that India had always seen Russia as a “trusted friend.”

“The group that has come [to the Russian Far East for a visit] will send a strong message back home in India, which will encourage more businesspersons to look at opportunities in Russia”, Goyal said.

Trade and Economic Ties Between Russia and India

Meanwhile, Russian Deputy Prime Minister and Presidential Envoy to the Far Eastern Federal District Yury Trutnev voiced the belief on Monday that the Indian delegation's visit to Russia's Vladivostok would boost trade and economic ties between the countries.

"Russia has always respected India, its culture, traditions and art. At the same time, our trade and economic ties are rather modest. We believe that today's visit will turn a new page in our relations", Trutnev said.

The official noted that the Indian delegation showed interest in cooperation in energy, agriculture, logging, infrastructure, high-tech and IT.

"I am sure that regional contacts of businesspeople and heads of regions of the countries will allow us to proceed to concrete projects in the said areas and find new ones", Trutnev added.

The deputy prime minister noted that contacts between the Russian and Indian leaders, including the forthcoming summit in Vladivostok in September, would improve investment climates and encourage businesspeople to invest in projects in the two countries.

"I am confident that the friendship between great powers — which Russia and India undoubtedly are — will contribute to peace and stability", Trutnev said.

Goyal is leading an Indian delegation visiting the Russian Pacific city of Vladivostok from Sunday through Tuesday. It comprises chief ministers of four states and businesspeople. Yury Trutnev, the presidential plenipotentiary envoy to Russian Far Eastern Federal District and deputy prime minister, is heading the Russian official delegation to the talks with the Indian guests.

Goyal’s visit to the Russian Far East comes less than a month ahead of the Eastern Economic Forum, which will have Indian Prime Minister Narendra Modi as the main guest. The three-day forum will be held in Vladivostok from September 4.