Hiroshima and Nagasaki? – US President Truman Was a War Criminal 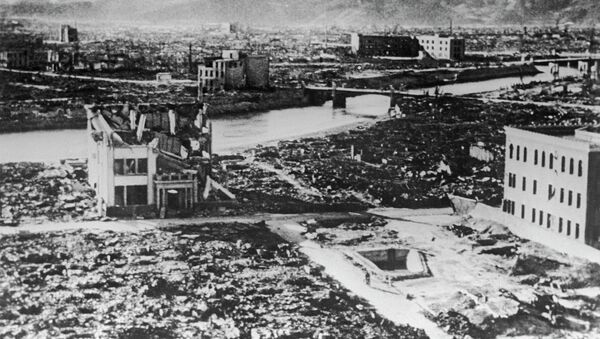 Tommy Sheridan
All materials
The decision has been robustly denounced over the last seventy-four years but from sources roundly ignored, demonised and/or discredited with the full weight of the "mainstream Establishment" deployed to defend it, justify it and protect it from proper and thorough scrutiny.

So much so that most schools and colleges across the Western hemisphere still teach the hideous lie that unleashing the literal hell of uranium and plutonium equipped bombs on the civilian populations of Hiroshima and Nagasaki respectively on the 6th and 9th of August 1945 was necessary to save lives and end the 2nd world war in Japan.

It wasn't necessary at all. It was, in fact, a vile and shocking crime against humanity, a war crime for which no one has ever been convicted.

To better understand the decision let us examine the mindset of the man who took it after only four months in office as one of the least prepared and generally unqualified Presidents of the United States of America, Harry S. Truman. 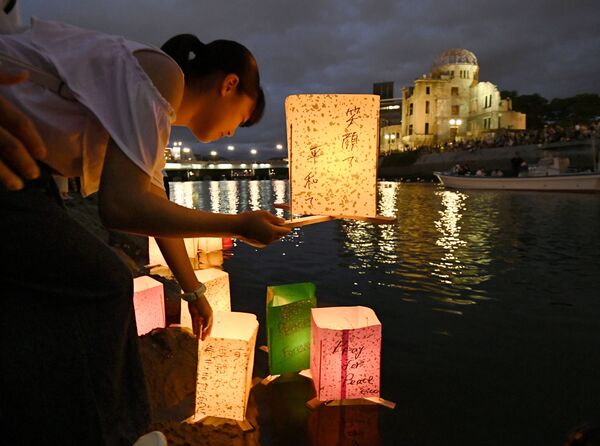 He owed his political advance to the dark forces within the Democratic Party machine who promoted him not to his own personal skills or achievements as a Senator. He represented a victory for the corrupt practices and nepotism within politics which is commonly nowadays called "The Swamp".

Raised on a Missouri farm the oldest of three children the twenty-seven-year-old Harry Truman expressed his world view in a letter to his future wife Bess in 1911:

"I think one man is as good as another as long as he's honest and decent and not a nigger or a Chinaman. Uncle Will says that the Lord made a white man of dust, a nigger from mud, then threw up what was left and it came down a Chinaman. He does hate Chinese and Japs. So do I. It is a race prejudice I guess".

Even his reverential biographer, Merle Miller, admitted in the Truman biography "Plain Speaking" that throughout his life;

"… privately Mr Truman always said 'nigger'; at least he always did when I talked to him. He also often privately referred to Jews as "kikes".

I don't know about you but I don't regard the written opinions of a twenty-seven-year-old man to be the over-exuberant ravings of developing youth. By that age, you have formed opinions of your own and what you write should justifiably be held up as a representation of you and your character. 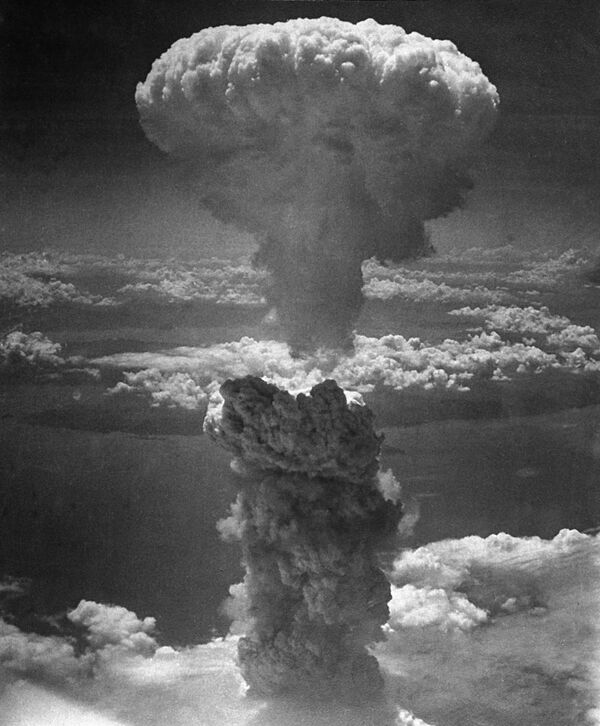 In this photo provided by the U.S. Air Force, a giant column of dark smoke rises more than 20,000 feet into the air, after the second atomic bomb ever used in warfare explodes over the Japanese port and town of Nagasaki, on August 9, 1945.
© AP Photo / U.S. Air Force

The excellent and thoroughly recommended "The Untold History of the United States" by Oliver Stone & Peter J. Kuznick exposes the collective mindset of the nation that racist President Truman was leading. He was on record years earlier as a "Japs" hater while mainstream newspapers and outlets were questioning if Japanese people were actually human. "Time" magazine wrote on July 5th 1943:

While the British Ambassador in Washington reported to London that "the Americans viewed the Japanese as a 'nameless mass of vermin' and displayed universal 'exterminationist' anti-Japanese feeling". (Stone & Kuznick; p149)

Acclaimed 2nd World War correspondent, Ernie Pyle, was transferred from Europe to the Pacific in February 1945 and wrote:

"In Europe, we felt that our enemies, horrible and deadly as they were, were still people. But out here I soon gathered that the Japanese were looked upon as something subhuman and repulsive; the way some people feel about cockroaches or mice". (At War with Metaphor: Media, Propaganda, and Racism in the War on Terror; Erin Steuter, Deborah Wills, p48).

This material is the absolutely essential background to the hideous and ghastly decision to drop atomic bombs on the Japanese cities of Hiroshima and Nagasaki for every objective and reasonable examination of the correspondence, communications and intelligence available to the US Government in mid-1945, especially after the surrender of the German Nazi forces in May, exposes the fact that the Japanese were willing to surrender without the need for a US-led invasion and that they feared more than anything else the advance of the Soviet Red Army after they had agreed to aid the Americans once Hitler was defeated in Europe. 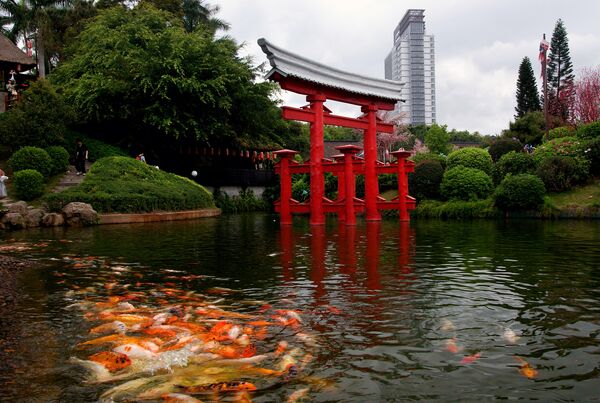 Japan was a devastated, demoralised and virtually defenceless nation. Their only objection to surrender was the term "unconditional" as they feared it would mean the complete destruction of their way of life and existence.

They were pro-actively seeking terms of surrender and were in contact with the Soviets to broker such a deal. The US dropped atomic bombs on them not to prevent further loss of life in combat but to establish world hegemony as the only Superpower both equipped and willing to use atomic bombs. That is the hidden truth.

When the B-29 called Enola Gay dropped the uranium bomb with a yield of 16 kilotons of TNT on Hiroshima at 8.15am on the morning of 6th August 1945 it was an act of brutal and unnecessary force which killed tens of thousands instantly as the 5,500 Degrees Fahrenheit heat instantly vaporised those immediately within the hypocentre of the unprecedented blast.

Humans were turned to smoking black char in a fraction of a second as their internal organs boiled away into the ether. Over 140,000 perished from the blast by the end of 1945 and over 200,000 were victims by 1950. 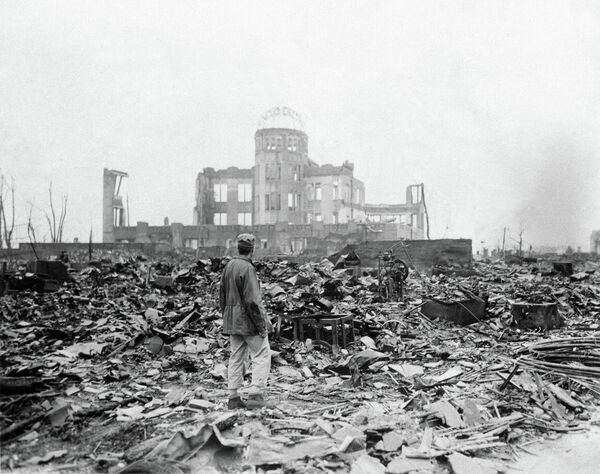 This Sept. 8, 1945 picture shows an allied correspondent standing in the rubble in front of the shell of a building
© AP Photo / Stanley Troutman

The US military official report said 3,242 Japanese troops had been killed in the operation.

President Truman was told of the successful bombing of Hiroshima with the world’s first Atomic bomb while dining on the USS Augusta travelling back from Potsdam. He jumped up from the dining table and exclaimed:

"This is the greatest thing in history".

Shortly afterwards he said that announcing the news of Hiroshima was the "happiest" announcement he had ever made (Stone & Kuznick, p171).

The brutal, conscious and calculated crime against humanity in Hiroshima was then repeated without a morsel of justification in Nagasaki three days later on August 9th. The initial target was Kokura but poor visibility forced the pilot Charles Sweeney to drop the implosive plutonium bomb on downtown Nagasaki instead.

It landed two miles off target and exploded over the largest Catholic cathedral in Asia with its 21 kiloton force incinerating anything and everything within several miles. At least forty thousand human beings died immediately, only 250 of them were soldiers. By the end of 1945, the death toll from the blast rose to seventy thousand and within five years the number of victims reached one hundred and forty thousand.

The radioman in one of the B-29's that accompanied the Enola Gay as it dropped the first bomb over Hiroshima on August 6th was Abe Spitzer. His plane was called the Great Artiste and his commentary on the explosion they witnessed was haunting to the core:

"Below us, spread out almost as far as I could see, was a great fire, but it was like no ordinary fire. It contained a dozen colours, all of them blindingly bright, more colours than I imagined existed and in the centre and brightest of all, a gigantic red ball of flame that seemed larger than the sun. Indeed, it seemed that, somehow, the sun had been knocked out of the sky and was on the ground below us and beginning to rise again, only coming straight up toward us – and fast". (Stone & Kuznick p167).

The view from the ground was very different. It wasn't just about light and colour but more about searing heat, devastation, charred bodies and dust.

Sankichi Toge became Hiroshima's most renowned atomic bomb poet and although he died in 1953 aged only thirty-seven his observational poem, "August Sixth", lives on as a powerful testament to the evil which was committed that day:

How could I ever forget that flash of light!

In an instant thirty thousand people disappeared from the streets;

The cries of fifty thousand more

Crushed beneath the darkness…

Crowds piled on the river bank, and on rafts fastened to the shore,

Turned gradually into corpses under the scorching sun….

How could I forget that quiet

Which descended over a city of three hundred thousand?

How could I forget the pleas

Of a dying wife and child

Emitted through the whiteness of their eyes,

Piercing our minds and souls!

Please pause and re-read that poem and then consider the reaction of President Truman on hearing the news of the successful Hiroshima operation. Remember he called it "The greatest thing in history". He was so pleased with the massive devastation and destruction that he gave the go-ahead for a repeat exercise three days later. 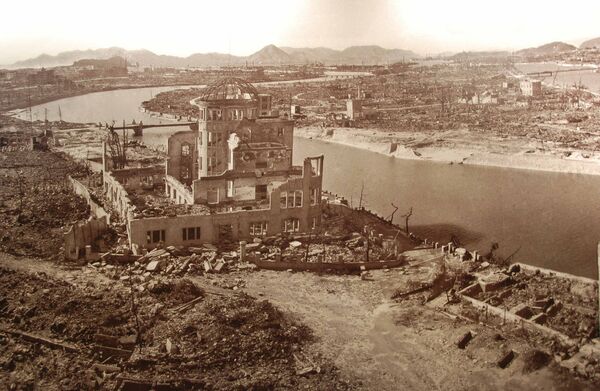 The radioman Abe Spitzer said he and the other crew members of the Great Artiste couldn'’t believe the decision was taken to wipe another city off the face of the earth after witnessing the Hiroshima explosion:

'Any fool' but not President Truman or the military Generals and political fellow travellers who he surrounded himself with.

The chief prosecutor at the Nuremberg Trials which determined the inhumane actions of the Nazis were crimes against humanity and international war crimes was Telford Taylor. He called the Nagasaki bombing a war crime:

"The rights and wrongs of Hiroshima are debatable, but I have never heard a plausible justification of Nagasaki". (Stone & Kuznick, p 173)

The Hiroshima bomb was nicknamed Little Boy and the Nagasaki one Fat Man. Inappropriate nicknames for weapons which caused so much death, destruction and lifetime disease and illness.

These two messengers of death and destruction are related to the modern batch of nuclear missiles but only distantly. While one bomb destroyed and devastated Hiroshima, Scotland's Faslane nuclear submarine base is home to 220 of them each with a destructive force 8 times greater than Little Boy and Fat Man.

Nuclear weapons are the most indiscriminate weapons ever created. They are incapable of differentiating between civilians and combatants in any conflict. 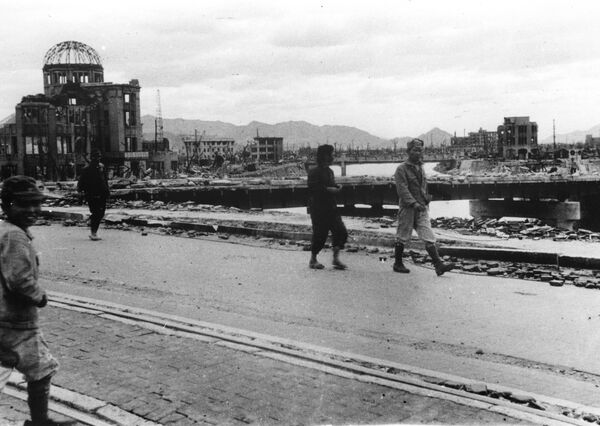 The rules of war demand that opposing armies target each other and avoid targeting civilians or civilian targets. Nuclear weapons ignore every dot and comma of the Geneva Convention designed to order the conduct of armed conflicts. They are illegal in that respect and they are immoral in their devastation of innocent civilians.

Every August we have a duty as human beings to remember Hiroshima and Nagasaki and commit ourselves to the earliest possible decommissioning of nuclear missiles. In the cause of unilateral nuclear disarmament, I have been arrested on six different occasions and served two short prison sentences. I am not ashamed or embarrassed by those arrests and prison terms.

I am embarrassed I have not done more to stop the evil which nuclear weapons represent. I support all peaceful actions aimed at disrupting the existence of nuclear weapons. They should never be allowed to be normalised. They are immoral, illegal and a shameful scar on humanity.

Every August we must declare NEVER AGAIN and pursue nuclear disarmament as quickly and loudly as possible. America should hold their heads in collective shame at the war crimes committed by President Truman in August 1945.