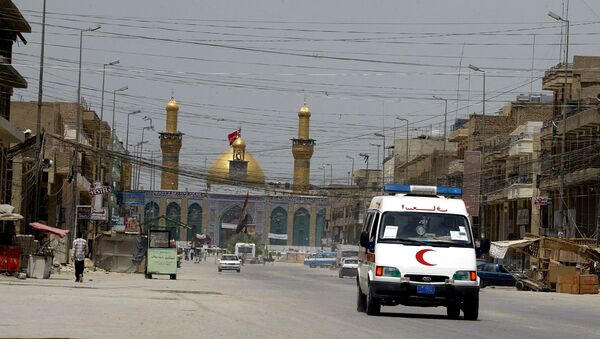 A huge explosion has taken place at a weapon depot inside a Popular Mobilisation Forces (PMF) base near Dora in Baghdad, Al-Sumaria reported, citing a statement by a representative of the Iraqi Ministry of Health.

Local residents have reportedly started evacuating their homes near the blast in Baghdad, as rockets and projectiles were flying into residential homes. Shrapnel from the explosions has reportedly landed in residential areas.

"Seven injured people have arrived at Yarmouk hospital, another six have been taken to Mahmudiyah hospital", Iraq's Ministry of Health said in a statement.

#breaking: Huge explosion at a weapons depot near Dora , Baghdad moments ago pic.twitter.com/UsJvPJ7ld0

Earlier, Sky News Arabia, citing its own correspondent, reported that the explosions took place in Baghdad’s specially protected green zone, where government buildings and diplomatic missions are located, as well as in the territories adjacent to it.

In May, the US ordered the evacuation of all government personnel from its embassy in Baghdad, as well as its consulate in Erbil, citing an unspecified threat emanating from Iran.

The decision was reportedly made after a rocket hit the Green Zone and fell near the US Embassy.