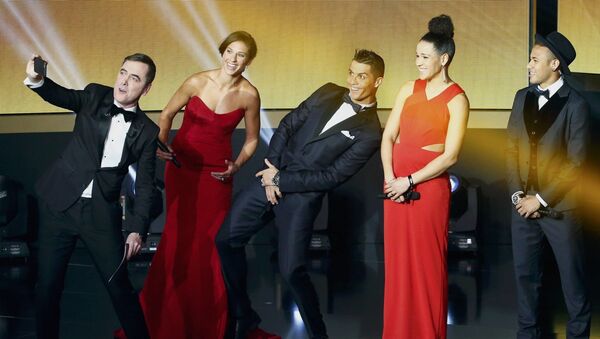 Although the epic competition for the right to be called GOAT between Cristiano Ronaldo and Lionel Messi has not been resolved, the Portuguese star striker seems to have picked a new rival – at least, for one advertising video.

A sneak-peek clip of two football stars, Portugal’s Cristiano Ronaldo and Brazil’s Neymar, pretending to be boxing has been posted on Instagram, garnering almost 100,000 views in a single day.

The video appeared on the account of the firm Neymar Sport Marketing, which exclusively represents the Brazilian footballer. As the clip caption suggests, the two stars, known for taking great care of their appearance and style, did not clash for real.

Thus, nothing threatened their looks, as the post was nothing but a behind-the-scenes video for a new campaign promoting a Portuguese telecom company. The plot of the promo explaining why the two were supposed to be punching one another has not been revealed, however.

It is hard to say who would have an upper hand if such a fight were to take place, but Ronaldo might have a better chance and at least turn to his pal, millionaire fighter Conor McGregor, for advice. The star footballer was once even spotted in a gym with the “Notorious”.

McGregor has also spoken highly of Ronaldo, calling him a “phenomenal athlete, person, and entrepreneur”.

“His all-around discipline, perfectionist attitude, and dedication to his craft is inspiring and has inspired so many young children to play football”, the Irishman told FIFA earlier this year.