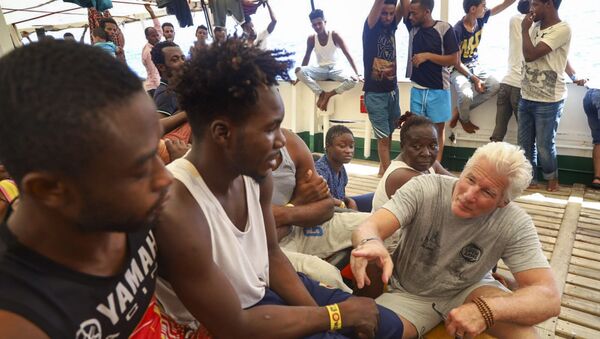 The Pretty Woman star dropped by an NGO vessel that rescued over 120 migrants from rafts at sea but was not allowed to dock in Europe. He called on the Italian government to stop “demonising” the newcomers. The country’s Interior Minister Matteo Salvini, known for his hard-line stance on migration, responded with a tongue-in-cheek remark.

Italy’s Deputy Prime Minister Matteo Salvini has taken to Twitter to confront Hollywood A-lister Richard Gere over his criticism of the country’s migration policy. The League party leader suggested that if the actor would give shelter to migrants from the NGO ship that he visited, then the crisis would be resolved.

“Given that this generous millionaire is voicing concern for the fate of the ‘Open Arms’ migrants, we thank him. He can take them back to Hollywood, on his private plane, all the people on board and support them in his villas. Thank you, Richard!” Salvini tweeted, also posting a collage with Gere and migrants from the ship of discord.

​The film star has weighed in on the migrant crisis facing Mediterranean countries, where many people are trying to illegally cross the sea from North Africa on rafts and other unsafe vessels. He visited one of the so-called rescue vessels picking up such migrants, a ship belonging to the NGO “Open Arms”. The Spanish boat, which now has 160 migrants on board, including minors, has been stranded for nine days as both Italy and Malta have refused to let it dock, while the EU is trying to figure out what to do with it.

The 69-year-old actor brought food to the ship, which is said will run out of supplies soon, and took part in a press conference on Italy's Lampedusa Island, near to where the ship is now.

He compared Italy's politics to the stance of the Trump administration and called on politicians in both countries to cease “demonising” migrants, saying that “this has to stop everywhere on this planet now”.

"We have our problems with refugees coming from Honduras, Salvador, Nicaragua, Mexico... It's very similar to what you are going through here”, Gere noted.

Italy is reportedly one of the most popular destinations and entry points for migrants, with over 20,000 sea arrivals in 2018 alone. Since the new government was formed last year, Italy has been pursuing a hard-line policy on migration, with Salvini being one of its most vocal advocates. He claimed that the country cannot continue to be what he referred to as Europe's "refugee camp" while neighbouring countries close their borders.

To tackle the influx of migrants crossing the Mediterranean in unregistered rafts and vessels in the hope of getting to Europe, the nation has kept its ports closed to NGO boats rescuing them since last summer. Salvini has referred to them as "pirate ships" that facilitate illegal migration. In June, Italy passed a security and migration decree that aims to curb the activity of rescue ships operated by humanitarian groups.