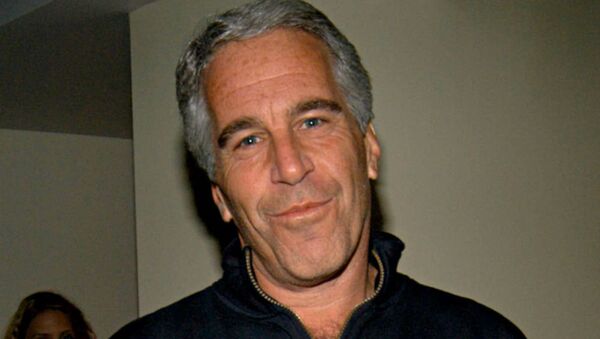 The Bureau of Prisons said on Saturday that lifesaving measures were “initiated immediately by responding staff,” and Epstein was transported to the hospital, where he was pronounced dead. The Bureau called his death an “apparent suicide,” although an investigation has yet to determine this conclusively. A number of officials told media outlets that Epstein had hanged himself in his cell, however, there was no public confirmation.

If Epstein’s death is still under investigation, and no one can explain yet how he killed himself, why is mainstream media reporting it definitively as a suicide? Even the FBI is calling it an “apparent suicide.” https://t.co/GRnz3ob94f pic.twitter.com/BHDF3tAShs

Attorney General William Barr later announced a Justice Department probe into Epstein’s death, which he also called an “apparent suicide,” while an FBI investigation has also been opened. Epstein had been held at the New York prison since his arrest last month on child sex trafficking and conspiracy charges. He pled not guilty to the charges, which carried a penalty of up to 45 years in prison. He was found dead in his cell in the special housing unit of New York’s Metropolitan Correctional Center (MCC) on Saturday morning at around 6:30 am EST.

His death raises many questions, as Epstein was rumoured to have been on suicide watch. According to the Bureau of Prisons policy, inmates on suicide watch are to be kept under “direct, continuous observation” in a room that allows “unobstructed vision of the inmate at all times.” Supposedly, Epstein was under supervision after he was found semi-conscious on the floor of his cell two weeks ago with marks on his neck. According to BOP policy, in addition to the constant monitoring, a suicidal inmate’s cell “may not have fixtures or architectural features” that would enable self-harm, such as hooks or bunks that could be used to tie a rope around.

I was arrested when I was 18 for skateboarding

How did Epstein manage to hang himself while on suicide watch and being so high profile?

Various reports state that Epstein had been removed from suicide watch.

If so, BOP guidelines require written justification for such a decision. https://t.co/6u5Lz4e3k9 pic.twitter.com/SAO3UKzoGZ

However, Reuters reported on Saturday that Epstein had been taken off suicide watch some time since his first apparent attempt on his own life. Photos of Epstein’s body taken by the New York Post also show Epstein’s body being wheeled into the hospital on a gurney, clad in a standard-issue prison jumpsuit, instead of the paper dress or ‘suicide smock’ usually given to inmates on suicide watch.

Moreover, inmates at MCC are said to be checked-in-on every 30 minutes throughout the night. When guards are away on their patrols, video surveillance usually picks up the slack. However, BOP policy does not mandate video surveillance of either suicide watch or regular cells. A former Al Qaeda prisoner, cited by RT, said that MCC staff monitor high-security cells with two video cameras, one above the shower and another above the toilet or bed. Epstein had been kept in this same extra-security area of the prison, a New York Times source said. The cameras are “placed strategically throughout the institution,” and are “sufficient” to ensure the safety of inmates and staff, according to last year’s BOP audit.

Michael Coudrey, a conservative commentator, suggested in a tweet that at the time of Epstein’s death there was an alleged "camera malfunction," without giving more details on the credibility of the information.

The mystery surrounding Epstein’s death had already led netizens, including notable figures from both sides of the political spectrum, to start a discussion of different conspiracy theories. One of the theories is based on the fact that Epstein's suicide ends the criminal case against him and thus prevents the appearance of other powerful names, including figures in the current administration.

Jeffrey Epstein's suicide ends the criminal case against him because no one else was charged in the indictment.

Me thinking the Epstein case was going to lead to the demise of the elite pedo ring and bring justice to victims vs. me when I found out #Epstein “committed suicide” pic.twitter.com/piLN4lp0A8

I’m with @AOC on this #Epstein mess. You don’t have to be a conspiracy theorist to see an evil coverup to protect lots of powerful men here. You’d have to be bizarrely naive not to. https://t.co/WDbek257US

However, in a court filing last month, the government said it was pursuing an "ongoing investigation of uncharged individuals" connected to Epstein, and US Attorney Geoffrey Berman confirmed on Saturday that the investigation will continue despite Epstein’s death.

STATEMENT OF MANHATTAN U.S. ATTORNEY ON THE DEATH OF DEFENDANT JEFFREY EPSTEINhttps://t.co/uCLv8aAPaZ pic.twitter.com/aQnRn3kjEH

Another theory, supported by US President Donald Trump’s retweets, suggested a connection with former President Bill Clinton, and was tweeted by Terrence K. Williams, a conservative commentator and comedian. Williams alleged that for Epstein to die by suicide indicated "somebody not doing their job, or somebody got paid not to do — not to do their job, so somebody can get knocked off, so information don’t come out” and compared it with to the 1994 suicide of White House aide Vince Foster that conspiracy theorists have long blamed on the Clintons.

Everyone reacting to epstein committing suicide:
The Clintons: pic.twitter.com/PuaP5kisI9

MSNBC host Joe Scarborough wasted no time in bringing up “the Russians,” saying that “a guy who had information that would have destroyed rich and powerful men’s lives ends up dead in his jail cell” is “predictably Russian.” However, nobody seemed impressed by the idea, as at no point since Epstein’s arrest has the billionaire financier been tied in any way to Russian figures.

A guy who had information that would have destroyed rich and powerful men’s lives ends up dead in his jail cell. How predictably...Russian.

The US prison system isn't notoriously corrupt or anything... gotta be a Russian op https://t.co/Tbp9LLyglM

Billionaire pedophile Epstein died, and this celebrity "journalist" immediately blames Russia, without a scintilla of evidence

In the new cold war TV "journos" blame foreign bogeymen for anything and don't need a shred of proof, because facts don't matterhttps://t.co/CsmAjBkI8A

Some of the theorists, however, gave up on finding a rational explanation, instead blaming aliens’ actions – or lack of action.

000000
Popular comments
Watch how many jews come out saying it was a simple suicide and that were all conspiracy theorist.
parkerjoe
11 August 2019, 07:57 GMT7
000000
Epstein is having dinner with Netanyhoo as we speak. Remember the judge who tried him a couple years ago said he was told Epstein was in intelligence? He with the Mossad and he got dirt on high ranking officials all over the world to blackmail them. Do you really thing an US attorney with the jewish name Berman will find anything? Hell no!!!
parkerjoe
11 August 2019, 06:53 GMT6
000000
Newsfeed
0
New firstOld first
loader
LIVE
Заголовок открываемого материала
Access to the chat has been blocked for violating the rules . You will be able to participate again through:∞. If you do not agree with the blocking, please use the feedback form
The discussion is closed. You can participate in the discussion within 24 hours after the publication of the article.
To participate in the discussion
log in or register
loader
Chats
Заголовок открываемого материала
Worldwide
InternationalEnglishEnglishMundoEspañolSpanish
Europe
DeutschlandDeutschGermanFranceFrançaisFrenchΕλλάδαΕλληνικάGreekItaliaItalianoItalianČeská republikaČeštinaCzechPolskaPolskiPolishСрбиjаСрпскиSerbianLatvijaLatviešuLatvianLietuvaLietuviųLithuanianMoldovaMoldoveneascăMoldavianБеларусьБеларускiBelarusian
Transcaucasia
ԱրմենիաՀայերենArmenianАҧсныАҧсышәалаAbkhazХуссар ИрыстонИронауОssetianსაქართველოქართულიGeorgianAzərbaycanАzərbaycancaAzerbaijani
Middle East
Sputnik عربيArabicArabicTürkiyeTürkçeTurkishSputnik ایرانPersianPersianSputnik افغانستانDariDari
Central Asia
ҚазақстанҚазақ тіліKazakhКыргызстанКыргызчаKyrgyzOʻzbekistonЎзбекчаUzbekТоҷикистонТоҷикӣTajik
East & Southeast Asia
Việt NamTiếng ViệtVietnamese日本日本語Japanese俄罗斯卫星通讯社中文（简体）Chinese (simplified)俄罗斯卫星通讯社中文（繁体）Chinese (traditional)
South America
BrasilPortuguêsPortuguese
NewsfeedBreaking
14:15 GMTRonaldo Will Cause as Many Problems as He Solves for Solskjaer, Ex-Liverpool Player Carragher Says
14:03 GMTXi Urges SCO to 'Resist' External Meddling After US, Australia Vow to Bolster Ties With Taiwan
14:02 GMTUN Security Council Holds Meeting on Afghanistan
13:39 GMTHitting US Debt Ceiling Could Trigger Recession, White House Says
13:32 GMTUnited Airlines Briefly Grounded Flights in US, Canada Due to Computer Issues, FAA Says
13:29 GMTDutch Acting Defense Minister Resigns Over Kabul Evacuations Chaos, Reports Suggest
13:27 GMTFrance Says It Cannot Trust Australia in Trade Talks After Canberra Ditched Joint Sub Deal
13:20 GMTPiers Morgan Says His New Job Will Be 'Stuff of Nightmares' for Meghan Markle
13:18 GMTIndonesia Wary of Australia's Plans to Acquire Nuclear Submarines
13:14 GMTUS Slaps New Hezbollah-Related Sanctions on Several Individuals
12:57 GMTPakistan Will Get ‘Badly Burnt’ If It Courts the Taliban Beyond a Point, Warns Author
12:51 GMTUS General Mark Milley Reportedly Downplayed George Floyd Protests' Severity in Talks With Trump
12:51 GMTIs Narendra Modi Emerging as the Most Sports Loving Indian Prime Minister?
12:28 GMTFAA Bans Drone Flights Over Texas Bridge After Thousands of Haitians Filmed Flocking to Area
12:27 GMT'Show Got It Wrong': Priyanka Chopra Apologises After Taking Flak Over 'The Activist' Format
12:05 GMTNicki Minaj Tweet That COVID-19 Vaccines Cause Impotence Sparks Protest Outside CDC HQs - Video
12:01 GMTPelosi Asked After Capitol Riot If WH Staff Did Anything But 'Kiss' Trump's 'Fat Butt', Book Claims
11:48 GMTArmenian Police to Block Streets Near Central Square Due to Planned Rallies
11:32 GMTUK Military 'Actively Recruiting' New Spies for Deployment in Asian Region Amid AUKUS-Caused Waves
11:14 GMTPunjabi Activists Clash With Police in Delhi During Anti-Farm Law Protests - Video