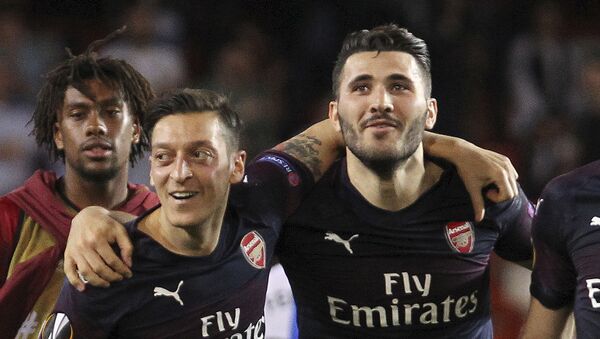 Arsenal stars Mesut Ozil and Sead Kolašinac have reportedly been placed under 24-hour guard after a knife-wielding London gang assaulted their car last month and a separate altercation between two men and security staff outside Ozil's home earlier this week.

Following the July carjacking attempt, a gang of East Europeans has allegedly stepped in to protect the footballers, having warned rival North London thugs that attacks on them would not be tolerated, The Sun reported on Saturday.

The rival gang, however, took that as an effort to intimidate them and doubled down on their efforts to target the Arsenal duo, purportedly vowing to "rob [the players] of everying".

Now, the media outlet claims that the two players have found themselves in the middle of a gang war:

"Word came back from the other gangsters that they would not be intimidated. To show they were serious, the thugs issued more threats to the Arsenal players and refused to be cowed. It was thought that originally the robbers wanted their watches but now they have been told that they want everything the pair have", an unnamed source told The Sun.

Such security threats have reportedly led Kolašinac's wife Bella to flee to Germany and even vow never to return.

Congratulations to the beautiful couple Mrs. & Mr. Kolasinac👰🏼❤🤵🏻 We wish you a wonderful journey as you build your new life together, lots of love🙏🏼

On 8 August, police arrested two men outside Ozil's home following a standoff with security staff, which even caused Ozil and Kolašinac to withdraw from Arsenal's opening Premier League game of the season. The security officers were stationed outside the German-Turkish player's London house following the carjacking attempt in July.

"Mesut Özil and Sead Kolasinac will not be part of the squad for our opening match against Newcastle United following further security incidents, which are being investigated by the police. The welfare of our players and their families is always a top priority and we have taken this decision following discussion with the players and their representatives", Arsenal said in a statement.

The two men, identified as Ferhat Ercan and Salaman Ekinci, both 27, were charged under section 4a of the Public Order Act on 9 August, and are scheduled to appear at Highbury Corner Magistrates’ Court next month.

Police said that they were treating the public order offence and the attempted carjacking as separate incidents.

CCTV footage from the carjacking attempt showed Kolašinac leaping from the vehicle and chasing off a knife-wielding gang on mopeds with his bare hands. As the players tried to drive away, they were chased through the streets of London in a high-speed pursuit until the Arsenal stars and their wives reached a nearby Turkish restaurant, where the staff helped them to scare the gang away. Neither of the footballers was harmed.

Kudos to "The Tank" Kolasinac for this heroic act of fighting off knife-wielding thugs who wanted to attack him, Mesut Ozil, and the two stars wives. Ozil assisted by driving the ladies off. pic.twitter.com/sLt9ax0f3p

Following the incident, the Bosnian-German player tweeted a photo of himself and Ozil, with the caption, "Think we're fine"...

...while Ozil took to Instagram to thank fans for their support and confirm that they all were "doing well" after the attempted assault:

@seadk6, my wife @gulseamine and me are doing well again after yesterday's incident in London. Thanks for all your supporting messages guys. 🙏🏼❤ #M1Ö

​"It was reported that suspects on motorbikes had attempted to rob a man who was driving a car. The driver, along with his passenger, managed to get away unharmed and travelled to a restaurant in Golders Green, where they were spoken to by officers", a Metropolitan Police spokesperson said at the time.