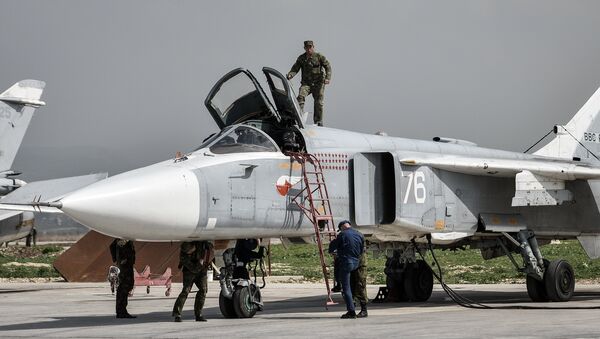 © Sputnik / Ramil Sitdikov
/
Go to the photo bank
Subscribe
Militants have regularly been trying to attack the Hmeymim base in Syria with drones. In July, Russian air defences at the base successfully countered a drone attack destroying the UAVs from a safe distance from the facility.

Air defence systems at Russia's Khmeimim base in Syria have thwarted an attack by what is suspected to have been a drone launched by militants, Syrian TV reported on Sunday.

The Russian Defence Ministryconfirmed later that air defence forces of the Khmeimim base detected and destroyed on Sunday six terrorist combat drones, which were approaching the facility.

"On August 11, at about 8:10 p.m. Moscow time [17:10 GMT], the air defence systems of the Russian airbase Khmeimim detected six unmanned aerial vehicles, which were approaching the airfield from the north-west," the ministry said in a statement, adding that all six drones had been destroyed and the base was operating in a normal mode.

On Thursday, Syrian militants fired four rockets from a multiple-launch rocket system in the direction of Russia's Khmeimim airbase. At least two local residents were killed and four more injured in the settlement hit by the militant rocket attack.

Earlier the same week, terrorists carried out an artillery strike against the airbase, injuring four civilians.

The airbase has come under numerous attacks over the years, with terrorists attempting to shell it using multiple launch rocket systems and coordinated assaults using drones.

Last year, the Russian defence ministry accused a US Poseidon 8 surveillance aircraft of coordinating a drone attack on the airbase after it was revealed that the plane was operating over the Mediterranean Sea at the same time that Khmeimim airbase defences fended off an attack by 13 combat drones. The US has denied the claims, calling them "utterly irresponsible." US spy planes have been repeatedly spotted operating in the area in the months since.

The Khmeimim airbase has been the home base of Russian forces deployed in Syria ever since Russia began its anti-terrorist operation in the country in September 2015. The base is guarded by a multi-layered joint Russian and Syrian air defence network.

000000
Popular comments
The drones were made in the USA!

orangeball
11 August 2019, 21:20 GMT7
000000
Wonder if there were any spy planes, sniffing around prior to the attacks?
anne00marie
11 August 2019, 21:22 GMT6
000000
Newsfeed
0
New firstOld first
loader
LIVE
Заголовок открываемого материала
Access to the chat has been blocked for violating the rules . You will be able to participate again through:∞. If you do not agree with the blocking, please use the feedback form
The discussion is closed. You can participate in the discussion within 24 hours after the publication of the article.
To participate in the discussion
log in or register
loader
Chats
Заголовок открываемого материала
Worldwide
InternationalEnglishEnglishMundoEspañolSpanish
Europe
DeutschlandDeutschGermanFranceFrançaisFrenchΕλλάδαΕλληνικάGreekItaliaItalianoItalianČeská republikaČeštinaCzechPolskaPolskiPolishСрбиjаСрпскиSerbianLatvijaLatviešuLatvianLietuvaLietuviųLithuanianMoldovaMoldoveneascăMoldavianБеларусьБеларускiBelarusian
Transcaucasia
ԱրմենիաՀայերենArmenianАҧсныАҧсышәалаAbkhazХуссар ИрыстонИронауОssetianსაქართველოქართულიGeorgianAzərbaycanАzərbaycancaAzerbaijani
Middle East
Sputnik عربيArabicArabicTürkiyeTürkçeTurkishSputnik ایرانPersianPersianSputnik افغانستانDariDari
Central Asia
ҚазақстанҚазақ тіліKazakhКыргызстанКыргызчаKyrgyzOʻzbekistonЎзбекчаUzbekТоҷикистонТоҷикӣTajik
East & Southeast Asia
Việt NamTiếng ViệtVietnamese日本日本語Japanese俄罗斯卫星通讯社中文（简体）Chinese (simplified)俄罗斯卫星通讯社中文（繁体）Chinese (traditional)
South America
BrasilPortuguêsPortuguese
NewsfeedBreaking
13:21 GMTIraq Arrests Activists, Ministry Employee for Calls to Normalise Ties With Israel
13:20 GMTMali to Explore New Security Partnerships As France Ends Sahel Operation
13:18 GMTMerkel's Potential Successor Laschet Reveals His Vote Preference in Election Blunder
13:11 GMTWomen to Dominate Iceland's Parliament for First Time Ever, Reports Suggest
13:09 GMTBlast Kills Taliban Intelligence Officer in Eastern Afghanistan, Source Says
13:00 GMTGermans Head to Polls to Choose New Bundestag
12:51 GMTDozens of New Yorkers Stage Anti-Vaccine Protest at a Food Court Chanting F**k Joe Biden
12:41 GMTFour Inmates Dead, One Injured in Attempted Jailbreak in Philippines, Reports Suggest
12:40 GMTVirginia Giuffre to Reportedly Hand Prince Andrew Secret Doc Able to Defeat Her Lawsuit
12:37 GMTRussia Scrambles Three Su-35 Jets to Escort US B-52 Bomber Approaching Border in Pacific Ocean
12:32 GMTCyclone Gulab Likely to Make Landfall in India on Sunday Evening
12:21 GMTUN Chief Warns 'Humanity Unacceptably Close to Nuclear Annihilation'
12:09 GMTKremlin Says It Hopes for Consistency on Minsk Agreements From Germany After Merkel Leaves
12:02 GMTRussian Presidential Spokesman Says Gazprom Fulfilling All Obligations
11:54 GMTLabour Leader Says It's 'Not Right' to Say Only Women Have a Cervix
11:43 GMT'F**k Them': Carlson Responds to Yet Another Call to Fire Him Over 'Great Replacement' Theory
11:42 GMT'Piece of Scum': UK Labour Deputy Leader Lashes Out at Tories
11:14 GMTUK Transport Minister Calls on Britons to Behave Normally, Says There is No Shortage of Fuel
11:12 GMTHamas Has No Place in Sudan But Will It Give Up on Former 'Base'?
11:05 GMTJapan Should Look Into Having Nuclear Submarines, Candidate for Ruling Party Head Says