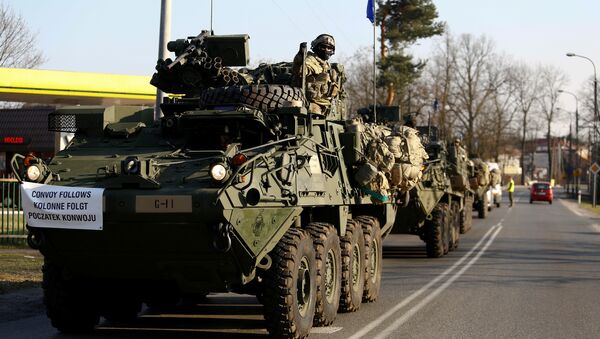 © REUTERS / Kacper Pempel
Subscribe
US Ambassador to Germany Richard Grenell has resumed criticising Berlin for failing to meet the NATO voluntary goal of 2% GDP spending on its military forces. He praised Donald Trump’s idea to redeploy troops from Germany to Poland and insisted that it was time for Berlin to "pay for its own defence”.

The minor partner in the German governing coalition, the Social Democrats, have voiced their incomprehension over a recent verbal offensive by US envoy Richard Grenell and his renewed warnings to remove American troops from Germany.

SPD lawmaker Thomas Hitschler has told the German outlet Die Welt that although this warning falls in line with Donald Trump’s international policies, the threatening tone remains “highly problematic”. He insisted that these accusations against Germany do not correspond to reality.

"I was on a tour of the USA a few weeks ago with Fritz Felgentreu [SPD member of the German parliament Bundestag]. Both the Senate and the House of Representatives as well as the Pentagon, all our colleagues have praised Germany's defence engagement”, Hitschler said, noting that none of them backed the idea of pulling out US troops from Germany.

The German MP insisted that Trump’s stance towards Germany is “indecent”.

At the same time, Germany’s NATO ally’s demands have been met with understanding within Angela Merkel’s Christian Democratic Party. One CDU lawmaker, Juergen Hardt acknowledged in an interview with the German outlet that the Americans are "significantly irritated" over Berlin’s reluctance to increase defence spending in following years and missing the voluntary NATO target.

"This triggered enormous irritations”, Hardt indicated, also noting that the US decision to relocate the country’s troops from Germany would have made their earlier investments into it obsolete.

The lawmaker suggested that “the skepticism towards Germany is growing” and added that Germany’s stance on a US-led mission to the Persian Gulf might have aggravated the situation.

"Germany must send a visible sign of solidarity there. At the moment, one has the impression that Germany is holding out and is even looking critically at the Americans' efforts”, he told Die Welt.

The German government has declined to comment on the debates about the US moving troops from the country. However, following the US envoy’s remarks the German Ministry of Defence emphasised that the US presence in Germany is important for it.

"The presence of our American allies means a lot for us. The members of the American Armed Forces are integrated into our society with their families and friends”, Ministry spokesman Frank Ensign said.

As the German outlet Frankfurter Allgemeine Zeitung reports, the cost of deployment is now mainly borne by the US Armed Forces, however, the German government annually allocates about 50 million euros. Additionally, Germany has passed more than 100 properties to the American Armed Forces at no charge, which spared the US an estimated sum of almost 600 million euros per year.

The debates were ignited by US Ambassador to Germany Richard Grenell who harshly criticised German military spending in an interview with German news agency DPA, claiming that Berlin abuses its friendship with Washington.

"It is really insulting to expect that the US taxpayer pays for more than 50,000 Americans in Germany, but the Germans use their trade surplus for domestic purposes", he said, praising Donald Trump’s idea, recently recalled by US ambassador to Poland, Georgette Mosbacher, to redeploy troops from Germany to Poland.

Trump previously suggested that the 2,000-strong increase to American forces stationed in Poland should be achieved at the expense of those based in Germany. The president tied the move to Berlin's reluctance to meet the voluntary goal of 2% GDP spending on its military forces, which he has persistently criticised since having taken office.