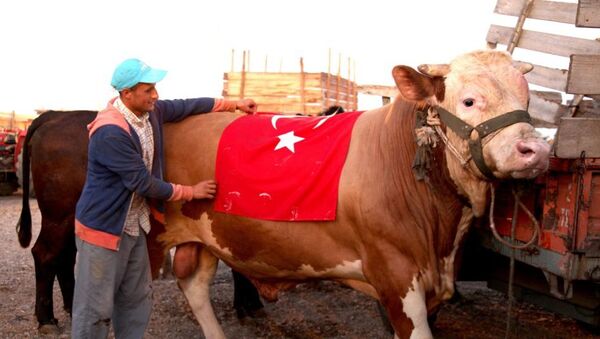 © © İHA
Subscribe
Preparations are underway in Turkey for the holiday Eid al-Adha, also called the "Festival of the Sacrifice", the first day of which this year falls on Sunday 11 August. The main holiday tradition is the slaughter of sacrificial animals, most often rams and bulls.

In December 2017, Moscow and Ankara signed a loan agreement for the delivery of S-400 Triumf air defence systems to strengthen Turkey’s airspace, as was repeatedly stated by Turkish President Recep Tayyip Erdogan.

Despite unprecedented pressure from the United States and its NATO allies on the Turkish leadership, as well as various political and economic threats, President Erdogan showed fortitude and political will worthy of the Turkish people, defending the country's national interests. The first batch of S-400s was delivered in July.

On the eve of Eid al-Adha, small and large cattle have been brought into cities around Turkey from nearby villages and farms. The brothers Seyfi and Ibrahim Keyvan, who are involved in livestock breeding in Çorum Province in northern Turkey, even put up for sale an ox weighing 1.5 tonnes, nicknamed S-400.

According to Ibrahim, they breed cattle every year for the holiday, and they decided to name this ox in honour of the S-400 because of its “brave and indomitable spirit”.

“The S-400 bull is three years old, all this time we looked after him like a child. Now it weighs 1.5 tonnes. President Recep Tayyip Erdogan took a decisive position, not giving in to the American pressure, and brought the S-400 to Turkey. Our bull has an unbending character, he is very brave and is not afraid of anyone, that's why we called him S-400”, Ibrahim Keyvan said.

“I'm proud to have raised such an animal”, he added.

The ox nicknamed S-400 was reportedly sold for 17,000 Turkish liras (about $3000) to a local district headman named Fehmi Vargeloğlu.

000000
Popular comments
Interesting... however. From all so called 'holy days' in all those so called religions that one is the most disgusting one!! btw.. that slaughter where in many places so called 'humans' literally wade in blood is not for all Muslims because it is a Sunni thing. Just saying.. PS. just to be clear. And the ox is?