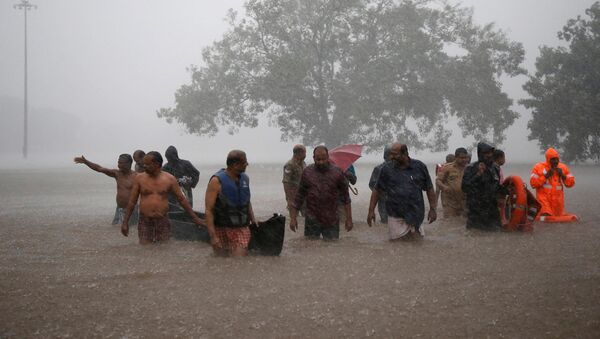 New Delhi (Sputnik): Heavy rain in the western Indian states of Maharashtra, Karnataka, and Kerala have brought life to a grinding halt in many regions, killing 48 people and displacing thousands from their homes.

In western Maharashtra 16 have people lost their lives to floods. National Disaster Response Force, with the help of the Armed Forces has been pressed into relief and rescue operations. The worst affected areas are the districts of Sangli and Kolhapur.

Defence PRO: 12 rescue teams of Navy left last night for Sangli by road after airlift was aborted due to unfavorable weather conditions in Kolhapur and Sangli. Police escorts were provided for a green corridor till Sangli. #MaharashtraFloods pic.twitter.com/y8lf954f99

​In neighbouring Karnataka, nine persons have been killed in flooding. Incessant rain over the last two days has hit rail and road communications, landslides were even reported in several areas. Around 45,000 people were taken to relief camps from the flooded areas. In several districts, schools and colleges have been closed.

Karnataka: 9 people have died in the flood-affected state, till date. 16875 people and 3010 animals have been shifted to 272 relief camps opened in the state.

​​Fear has gripped the southern state of Kerala, which still hasn't recovered from the worst deluge of the century a year ago. Several rivers have topped their banks, inundating scores of towns and villages. Official sources confirmed 23 deaths, while over three dozen people are feared trapped, and dozens of houses washed away in landslides in the hilly Wayanad District.

​The weather office has predicted the state would experience more heavy rain until 14 August and sounded red alerts in four districts. Twelve of the area's 14 districts have been affected by the rain.

Cochin International Airport, one of the busiest in southern India has been closed until Sunday (11th Aug). The state administration has ordered the closure of schools and colleges across the state on Friday.

CIAL has informed that the operations of the Cochin International Airport, Kochi (COK) will remain suspended till 1500 hrs of Sunday (11/08/2019). pic.twitter.com/JPFwvVDWvu

​The neighbouring district of Nilgrils in Tamil Nadu has received a record rainfall, breaking a 76-year-old record, according to reports.