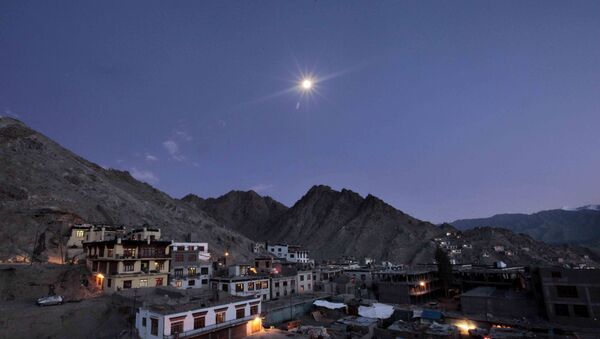 Rishikesh Kumar
All materialsWrite to the author
New Delhi (Sputnik): India’s move to separate the Buddhist-dominated Ladakh region from the disputed Jammu and Kashmir state has garnered much global attention. It triggered a verbal duel between India and China, despite their improved ties and understanding even during complex border skirmishes.

As the Indian parliament cleared the Jammu and Kashmir Reorganisation Bill 2019 earlier this week, Beijing reacted sharply to New Delhi’s unprecedented move, stating that India has continued to undermine China’s territorial sovereignty and that such a “practice is unacceptable”.

A peeved India promptly chose to set aside the Chinese objections, saying its clearance of the bill for the formation of the “Union Territory of Ladakh” is an “internal matter concerning the territory of India”.

Many in India, however, have been left stunned to see the strong Chinese reaction, since the Indian government’s move was widely seen as unrelated to the international boundary between the two neighbours.

Following the Wuhan Informal Summit, the bilateral relations, including the border issues, witnessed a sharp improvement. The leaders and armies on both sides publicly accepted it as well.

Luo Zhaohui, the then Chinese ambassador to India, in May this year likened the border skirmishes to a family quarrel, while saying: "Something going wrong between two great neighbouring countries is natural, just like brothers of a family living under one roof have issues".

On several occasions when local authorities in India reported transgression or airspace violations by the Chinese side, the federal government would downplay the incidents, contending that they occur due to the two neighbours’ varying perception of the Line of Actual Control (LAC).

According to Ambassador P. Stopden, India’s former envoy to Kyrgyzstan and current chairman of the Ladakh International Centre, the latest warning from Beijing to New Delhi is being called “Proforma Protest”, meaning a reiteration of China’s stated position on areas under its rule and its objections to any sign of alteration or trespass.

“They (China) also know they are not in a position to take any part of Ladakh under Indian occupation. They are aware that India will also not create a situation by transgressing into the area referred to by China as Aksai Chin. So I feel neither country would want to disturb status quo as it exists now”, said former Ambassador Stopden.

In 2016, the armies of the two Asian giants became embroiled in the Demchok area of Ladakh, when over 50 Chinese troops tried to halt civil work at a small village.

A similar stand-off was witnessed in 2013, when over a dozen Chinese troops crossed onto the Indian side of the LAC at Demchok and didn’t leave for over a week.

At the core of these incidents is the 823 km of un-demarcated boundary between India and China, which had not been disturbed for centuries due to cultural, religious, and other historical relations with Tibet.

The first attempt, (as per documented fact), was made in 1846, when the British Army annexed Ladakh after defeating a Sikh army. Alexander Cunningham, in his book titled "Ladak Physical, Statistical and Geographical", explained the attempt made by the then British ruler to demarcate the boundary in 1846.

Later, in a book titled "India China Relation: Future Perspectives" B.R. Deepak and D.P. Tripathi wrote "various boundary lines such as Johanson Boundary (1865), John Ardagh Boundary (1896) and Macartney-McDonald Line (1899) were unacceptable to China. These have been drawn as result of unilateral British surveys in the western sector and are not delimited on the ground".

"As regards the traditional and customary boundary lines claimed by India and China, they are like two parallel lines that will never converge", the book observed.

What China Wants - Status Quo With Some Ambition

“This latest warning is another clear sign of China once again trying to assert itself, periodically asserting its regional status, not only vis-à-vis India, but also with other Asian countries”, Anuradha Chenoy,  professor at Jawaharlal Nehru University in New Delhi, commented.

“Beijing shouldn’t be issuing threats and warnings through open declarations from public platforms such as media briefings etc. We must clearly understand that China is not a benign nation and never will be. It has its own geo-strategic ambitions likely any other country and will always seek to achieve it”, Prof. Chenoy added.

Since becoming India’s prime minister, Narendra Modi has tried to demarcate the 823 km Ladakh frontier, where only two points are recognised as disputed between the two countries.

In September 2014, Modi proposed a boundary demarcation. But he didn’t succeed to persuade or win similar consent from Chinese President Xi Jinping. In the last three years, the two armies have met at Ladakh on several occasions to build trust and thereby to minimise any altercation in the region.

Chinese researcher Adam Ni, however, felt that the two wars between two countries have “coloured Indians’ strategic perception about China".

“I think after the Doklam incident both sides are more cognisant of the risks of such a standoff. So there is increasing contact between Chinese and Indian militaries. That being said, I think, we shouldn’t rule out the possibility of such a standoff from happening again", Adam said.

China’s stern reaction came just days ahead of Indian External Affairs Minister S. Jaishankar's scheduled visit to Beijing. It will see discussions on the entire gamut of bilateral relations to lay the groundwork for a second informal summit between Indian Prime Minister Narendra Modi and Chinese President Xi Jinping by the year-end.

An early indication (continuation of visas facilities for Indian pilgrims) is that the two countries are likely to touch the Ladakh issue, but most unlikely to impinge upon the whole new stage of bilateral relations; especially when the two Asian giants have been fighting complex trade wars imposed by the US.