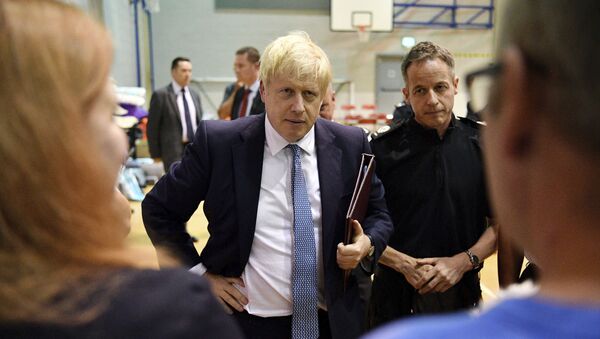 British Prime Minister Boris Johnson is set to hold talks with Irish Taoiseach Leo Varadkar over the potential ramifications of a no-deal Brexit. Political commentator Keith Rowe expressed his opinion on the story.

Sputnik: Is a no-deal Brexit now inevitable? And has the British government prepared adequately for this scenario?

Keith Rowe: I think the odds are certainly increasing in favour of a no-deal Brexit, which I think is the right way to go, to be honest, we don’t need to pay this thirty-nine billion pounds that Mrs May agreed, which we get nothing back for, and all the other terms that were unacceptable about the Irish backstop and all these other trade things.

I think the chances of a no-deal Brexit are increasing, and I think that’s the way it should go. Of course; the British government has spent the last three years messing about instead of really negotiating, they’ve done a very poor job, and if the end result of that is a no-deal Brexit, then at least the best outcome will have been achieved.

Sputnik: Would a no-deal Brexit lead to a hard border in Ireland?

Most of Ireland’s trade is with, or comes through the UK, so it’s in their interests to keep the border absolutely open and flowing, which is exactly what the British government wants. The Irish government at the moment is really worried about the future of their economy once we’ve left, and certainly, a hard border would be one more obstacle to their economy succeeding.

Keith Rowe: That very much depends on how he continues to handle the matter of Brexit. If he succeeds in getting Britain out of the EU, and he does it successfully so that we can keep our money, regain control of our laws, borders and fishing grounds etcetera, and he achieves a true Brexit, then I think once that’s done, the British public will be so relieved.

The other options are so dreadful if you take into account the Labour Party at the moment, with their anti-Semitism and their dreadful lack of co-ordination on policies on other matters. I think he would have every chance.

If on the other hand he relaxes or relents in any way, and gives in to terrible compromises that are against the British interests, and goes back on what he said to the British people; then I think he’s got every chance of losing a general election, because Brexit Party will take a huge number of Conservative votes if that happens.

The Brexit Party will also take a huge amount of Labour votes, and I think that the situation is difficult to predict exactly at the moment, but it will certainly be a confused situation, and the Conservative Party certainly won’t have certainty of winning.

This is very much in Boris Johnson’s hands, and he’s got to play it tough, he’s got to continue and follow-through, if he does that; then he’s got every chance of winning a general election.

The views expressed in this article are those of the speaker and do not necessarily reflect those of Sputnik.
Newsfeed
0
Access to the chat has been blocked for violating the rules . You will be able to participate again through:∞. If you do not agree with the blocking, please use the feedback form
The discussion is closed. You can participate in the discussion within 24 hours after the publication of the article.
To participate in the discussion
log in or register
loader
Chats
Заголовок открываемого материала