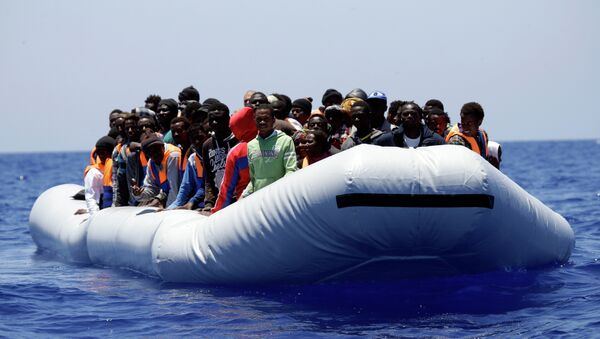 The latest development in the seemingly endless English Channel migrant crisis risks further enflaming widespread frustration in the UK over perceptions that the government is not going enough to stem the flow of asylum seekers.

A UK Border Force operation has been carried out off the coast of Kent, where it was reported that up to 50 migrants were spotted in boats sailing toward land.

HM Coastguard confirmed to local media on Friday August 9 that it was responding to a “number of incidents off Kent,” while a local resident also confirmed to Kent Online that she witnessed about 50 migrants in “small boats and canoes” being brought ashore at Dover’s Western Docks.

A spokesperson for HM Coastguard has been quoted as saying that, “[the coastguard] has been coordinating a search and rescue response to a number of incidents off Kent, working with Border Force, Kent Police and other partners. We are committed to safeguarding life around the seas and coastal areas of this country.”

“HM Coastguard is only concerned with preservation of life, rescuing those in trouble and bringing them safely back to shore,” the spokesperson added.

Now can anyone tell me why the #French cannot stop 50 people paddling canoes from getting to England as they are supposed to. Once dishonorable, always so it seems to me. We will certainly be able to stop their fishermen @EmanuelleMacron

Discracefull why can't they just send them back. And there all men coming over 18 men one woman and one child.

The news comes hot on the heels of an incident during the early hours of the same morning, when another boat reportedly carrying 11 migrants flipped over off the coast of Boulogne, but was rescued by the French coastguard.

Yet, the string of incidents does not end there: a ship operated by the French humanitarian group Doctors Without Borders is said to have rescued 80 migrants off of the coast of Libya who were traveling in a rubber dinghy, also on August 9.

The news follows another incident last weekend when around 40 migrants were detained after crossing the Channel to UK shores. According to reports, the migrants were predominantly of Iranian and Iraqi nationality. At the time, the UK Home Office issued a statement that, “anyone crossing the Channel in a small boat is taking a huge rusk with their life and the lives of their children.”

“It is an established principle that those in need of protection should claim asylum in the first safe country they reach and since January more than 50 people who arrived illegally in the UK on small boats have been returned to Europe,” the Home Office statement added.

What a bloody joke, why are we not sending them back ? Funny as the french think it’s their waters when there’s fish. When it’s illegals it’s our responsibility 🙄 and please they’re illegals not migrants

If they sent them back they would think twice about coming over again. it would be even worse if corbyn and his mates were in power

@patel4witham when will the coastguard stop acting as a taxi service to these ilegal immigrants?

While the number of migrants heading to the UK by sailing - or attempting to sail - across the channel on small makeshift boats is relatively small, there is simmering frustration among some Brits who feel that those seeking asylum should simply be sent back to Europe.

A petition that garnered 28,175 signatures was recently circulated on the British government’s website, which called for UK authorities to “send English Channel migrants back to where they first arrived - in the EU.”

“As the United Kingdom approaches the date set for leaving the European Union, we must show the world that we are capable of defending our sovereign borders. Under EU & international law an asylum seeker should claim asylum in the first safe country they enter,” the petition reads.

According to official statistics, more than 1,000 migrants landed in the UK since the start of November 2018, with 47 of them having arrived within the last week. Figures show that 562 migrant crossing across the English Channel on small boats were made in 2018. Of those, 297 managed to arrive in the UK. 177 also attempted to cross between January 1st 2019 and 28th February, out of which 131 managed to reach British shores. Most of the migrants have been from Iran, Afghanistan and parts of Africa.

Over 50 economic migrants have been spotted crossing the English Channel this morning, in canoes...

Pick them up and send them back immediately. Rewarding those who act illegally and encourage others to embark on such a perilous journey would be gravely irresponsible!