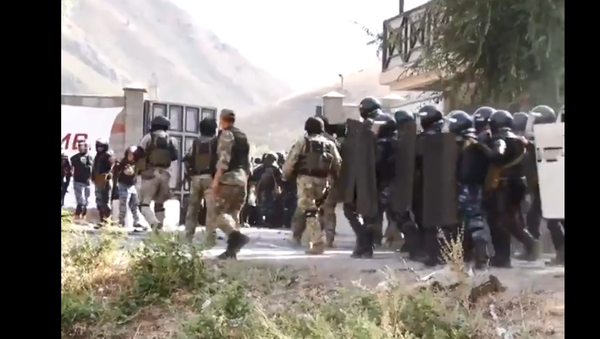 Atambayev’s capture followed a day of stiff resistance by him and his supporters that initially forced police to retreat from his estate outside the capital of Bishkek.

After he refused to answer parliamentary subpoenas with regards to alleged corruption, police on Wednesday attempted to storm the mansion of Atambayev, who served as the president of Kyrgyzstan from December 2011 to November 2017. Atambayev has denied the accusations levied against him.

In video captured of the raid, 200 armed police forced their way past twice their number in unarmed Atambayev supporters in and around his walled compound in the town of Koy Tash, 12 miles outside of Bishkek, as smoke billows into the sky.

​Bullet holes litter the door frames of the ransacked mansion, and blood is splattered across wooden wall panels. Atambayev is later seen in police custody, walking toward police vehicles parked near the wrecked iron gate to the compound.

Over 80 people were injured and one police officer killed in the Wednesday battle in and around the mansion after Atambayev’s supporters rallied to defend him, Sputnik reported. Atambayev admitted to firing some rounds at police himself.

President Sooronbay Jeenbekov, who succeeded Atambayev in 2017, accused his predecessor on Thursday of violating Kyrgyzstan’s constitution by resisting arrest.